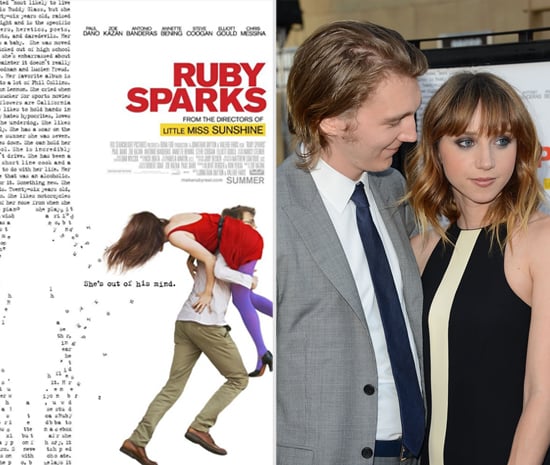 In Ruby Sparks, out today in limited release, two things elude young novelist Calvin (Paul Dano): an idea for his second book and a meaningful relationship. When an enchanting redhead named Ruby Sparks (Zoe Kazan) comes to him in his dreams, she fills both those needs. Calvin starts writing Ruby's story as fast as he can and even admits to his therapist that he's falling for this figment of his imagination. His literary muse would be harmless, until Ruby miraculously appears in his apartment as his living and breathing dream girl. Ruby is warm, romantic, and beguiling — everything Calvin made her. Calvin and Ruby go on as a literally implausible yet happy couple, but when Ruby starts to get restless in the relationship, Calvin is tempted to go back to his typewriter. He created her, and when he continues to write her story, he has the power to change her.

Valerie Faris and Jonathan Dayton, the husband-and-wife team behind Little Miss Sunshine, directed Ruby Sparks. They weren't the only couple working on the project. Zoe Kazan, who wrote the film and stars as Ruby, acts alongside her real-life boyfriend, Paul Dano. Director Valerie told us, "We thought there was a lot that could be borrowed from who Paul and Zoe are. In rehearsals we took them back to how they met and to their first kiss, and we used a lot of that when we were shooting the film." But there were also layers of Paul and Zoe to strip away. "Zoe is very flirtatious in real life," Jonathan told us. "And the script actually had her a little more that way. We asked Zoe to trim that and really change her performance. As soon as she did, it was as if Ruby appeared before all of us, and even Zoe felt like: that's Ruby." We had a chance to sit down with Zoe Kazan, who at 28 years old has captured many recognizable realities of relationships in her magical story Ruby Sparks.

TrèsSugar: Although this movie has a fantastical premise, I found it really authentic.

Zoe Kazan: Well my favorite movies are sort of magical in tone. Movies like Groundhog Day. They're about something real, and that balance of humor and ethos is so hard to achieve. Very early in my writing process I thought we had to get Jonathan and Valerie to direct this because I think that they are incredible at that balance. If you look at Little Miss Sunshine, someone dies in the middle of that movie and it's still a comedy; somehow they manage to make that funny and sad. In the wrong hands, it could go really wrong, so I owe it all to them.

TS: What realities of relationships did you try to convey in your screenplay?

ZK: For me there's a lot about how we define each other in a relationship. We all start with an idea of a person when we meet them. All of our romantic ideals get projected onto them, and then we move toward knowing the real person, and that transition to me is the most interesting. How do we do that and how do you love the real person? How do you have free will in a relationship when you’re responsible to the other person?

TS: In the movie, we see one man try to create his "dream girl." Do you think women have one-dimensional fantasy versions of men, too?

ZK: I think men put women on a pedestal — real women — in a way that women don't do to men. And we talk about it like that's the apex of love, when men say, "She's my goddess" or "She's my dream girl." That's supposed to be a good thing, but I have felt in relationships very lonely in that situation where I feel like I'm so on this pedestal that you don't actually see me. You claim to love me so much, but I feel so lonely right now. Why is that? So I was writing from that perspective.

TS: What do men miss when they focus on finding their "dream girls"?

ZK: It's just the difference between knowing someone's interior or not. Recognizing another person's interiority is very difficult, and I think it's particularly difficult for young men. Calvin's brother (Chris Messina) says that "quirky, messy women whose problems only make them endearing are not real," and that's sort of how I feel. I am not a bundle of quirks and neuroses that you can think are adorable. I'm a person with real problems and I wake up with savage grief or incredible rage. I'm a real person who has the capacity for growth; I'm not some doll that is defined by a series of adjectives. I think that there's this way that we are taught as young women: you are attractive if you're like this, or you will be lovable if you're like that. I have found it very hard to figure out who I am when I feel those kinds of messages being sent in my direction. It took me years of messing up in relationships in order to finally realize that I need to make myself happy.

TS: What was it like to work with Paul Dano, your partner in real life?

ZK: Well, Paul is an incredibly private person, and I think if I had written characters that were close to us, he would not have wanted to act in it. I was conscious of not putting too much of us in there, and I know that Jonathan and Valerie were also very careful; they would say to us, "Too much Zoe and Paul." They had their eye on Calvin and Ruby. I love working with Paul. I think it's very hard to spend all day with your partner and have it not be about the relationship; it's like most people if they were going to spend 24 hours a day together, they're on a honeymoon or they're on vacation. We would be at work and have all these other responsibilities and wouldn't have the time to give to each other, so it definitely put a strain. During those months, I felt like I missed him. There was so much less intimacy than there normally is. But then, when I look at the finished product and we're so proud of it, it feels like it was totally worth it.

TS: Valerie told us that your real-life first kiss inspired the first kiss scene between Ruby and Calvin.

ZK: Sometimes when real-life couples work together, there's less chemistry, weirdly, and we were very aware of that so we tried to heighten the tension. We actually didn't kiss for a week-and-a-half before that first kiss in the movie because we wanted to build up that desire and tension for each other. It was really romantic to harken back — not that we're not in love anymore — but it's been five years and that first butterfly feeling is not one that's chiefly there anymore. So it was fun to get to relive some of that.

TS: In the film, Calvin has the power to rewrite Ruby's personality. As an actor, was it challenging to play Ruby?

Find out Zoe's answer to that and more below.

ZK: I think that we're all so challenged, actually; I don't feel like the same person all the time, and obviously in different situations we're completely different people. For example, you sitting here with me you're completely different than you are when you're out with your boyfriend or out at the club, so it didn't feel so strange. It was just like letting a different part of her lead. But there are some more exaggerated scenes, and it's really fun to get to do those, actually. I find them really funny to watch.

TS: Calvin created Ruby and therefore had control over her, which led him to a dark place. How did you decide how far to go when writing the script?

ZK: I knew I didn't want to write a story like Click or Bruce Almighty. I really like those movies, actually, but I just knew this was a different kind of movie. It seemed like I couldn't write a movie where a man controls a woman without going to that dark place; it's like it would be a lie not to be there or it would be really misogynistic not to go there. If you're going to allow the audience to enjoy him manipulating her at the beginning, they have to know what the moral ramifications of that are. From the very start I knew it had to go there.

TS: How did you keep Calvin likable?

ZK: Part of what the movie is about is that what makes people likable is actually their wholeness as a person. We can't pick and choose. Everybody is flawed. Just as Ruby is flawed, so is Calvin. Calvin doesn't start to change her until he feels like she might leave him; that very human thing of not wanting to lose the person you love makes him act badly. But to me that doesn't make him less likable; it just makes him more human.

TS: How did you like screenwriting compared to acting?

ZK: It feels like two parts of my brain or two parts of my soul or something — I don't know. I never meant to be a professional writer; I just wanted to be an actor. But I started writing because I was so bored between jobs and I had to have a creative outlet somewhere. Now I feel like it's something I crave.

TS: What would you like to write about next?

ZK: There are a couple screenplays that I've started that I just need to finish.

ZK: Well it's funny because normally I've been able to juggle two careers. This year I've just been acting so much that I haven't had any time to write, and I miss it.

TS: Would you write about relationships again?

ZK: I would, but I think from a very different perspective.

TS: What kind of different perspective?

ZK: I just think I've finished telling this story. I don't think I would really want to write something that's magic-realist again. This was a very special thing where I feel like the story came to me just the way it was.

Books
Red, White & Royal Blue Fans, Get Ready — Casey McQuiston's Newest Book Will Stop You in Your Tracks
by Madeleine Fournier 1 day ago 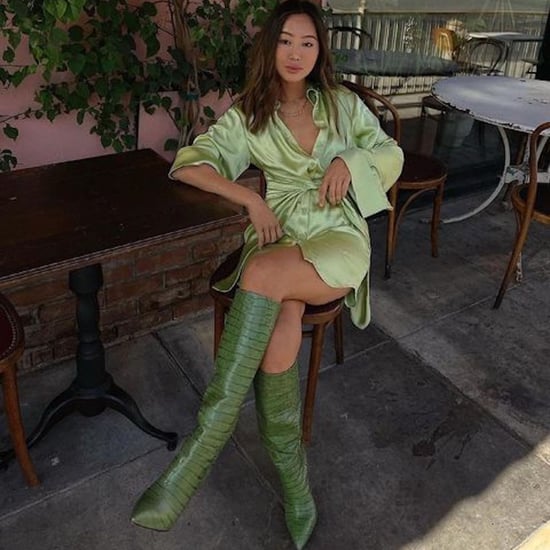 Summer Fashion
I'm a Shopping Editor, and These Are the 17 Items on My Personal May Wish List
by Macy Cate Williams 2 days ago