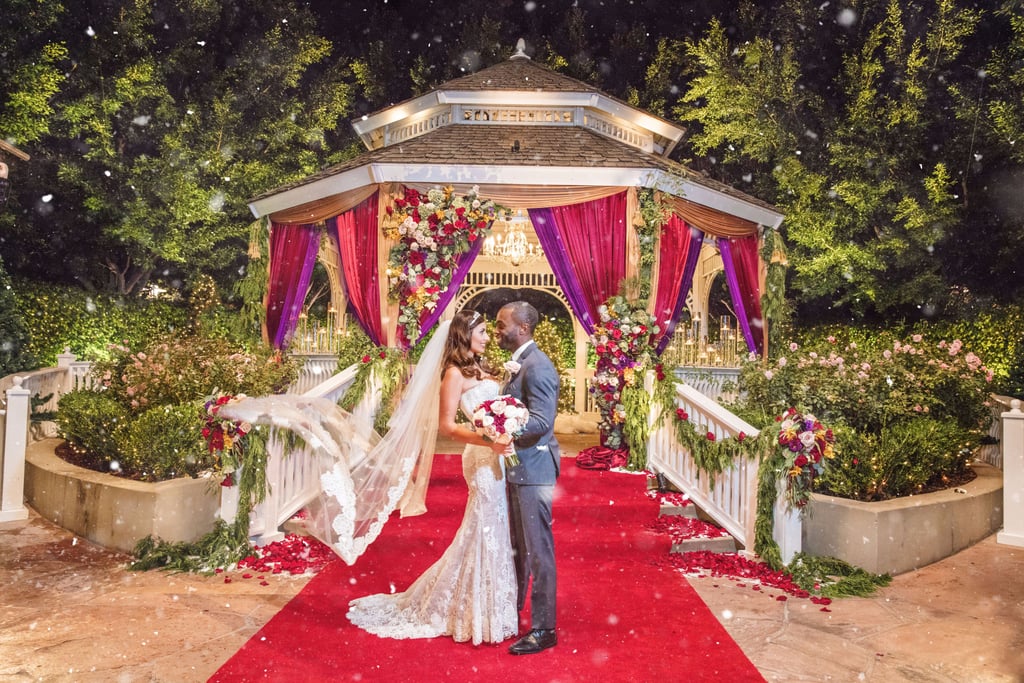 This Disney Fairy Tale Wedding Was Holiday Themed — and Held at the Happiest Place on Earth!

We know how magical it is to visit Disneyland during the holiday season, but imagine getting married there this time of year. Lucky for Melanie and Greg, the sweet pair were able to tie the knot at the Happiest Place on Earth and have it filmed for the Disney's Fairy Tale Weddings: Holiday Magic special (aired Dec. 11 on Freeform).

The two originally met during a week-long annual work training, but it wasn't a Cinderella-Prince Charming story right off the bat. Both of them admitted to POPSUGAR that they did not hit it off at all at first, but then "it was love at second sight." Greg had made a joke that rubbed Melanie the wrong way, but sparks flew the next time they saw each other, and they've been inseparable ever since.

Knowing that Melanie had always been a passionate Disney fan, Greg contacted Disney to help plan a special proposal at Disney World, which aired on Disney Fairy Tale Weddings in May. Cast members led them down the Boma Platform that sits in the middle of the Kilimanjaro Safari in Animal Kingdom. As they admired all the animals in front of them, Greg got down on one knee and popped the question after a heartfelt speech.

"After that experience, we both thought that it would be even more magical if we actually tied the knot at Disney as a way of completing the fairy tale," he told POPSUGAR.

When we asked the couple whether they're both huge Disney fans, Greg said his wife was a big enough fan for the both of them. "I do enjoy Disney but her love for princesses and the Disney theme parks is what gave me the idea in the first place."

Related:
This Couple Rented Out Toy Story Mania For Their Disneyland Wedding, So We Can Stop Trying Now

Melanie explained how she had always dreamed of having an outdoor holiday wedding since she was a little girl, but knew it wouldn't be possible in the cold Michigan Winter. So instead, Disney's Fairy Tale Weddings transformed the Rose Court Garden in the Disneyland hotel into a Winter wonderland.

"The decor for the ceremony and reception was everything I ever dreamed of, coming to life!" Melanie told us. "The deep royal reds and purples are something I've always loved — it reminds me of Beauty and the Beast."

Chandeliers and gold tones gave it an elegant, holiday-evening feel, and of course, Christmas trees were an absolute must. Festively lit trees lined the red carpet aisle while remembrance trees filled the gorgeous reception to honor those who couldn't be at their wedding.

The groom chose caramel corn as their wedding cake flavor, as caramel corn is one of his favorite snacks of all time. It was also the first caramel corn cake that Disney had ever made.

In addition to the beautiful details, Melanie and Greg's big day was also full of special moments. Their niece, August, danced ballet down the aisle while Greg's daughter, London, sang "Have I Told You Lately" by Rod Stewart, a song that he and his grandfather sang to each other while growing up. Melanie also planned a surprise choir performance for Greg at the end of their ceremony to honor his mother, who was in the choir. London opened the song and the newlyweds walked out and danced for their first time as husband and wife.

When we asked the couple what it was like to have their wedding at Disneyland, they both shared that it was everything you'd imagine and more.

"Having our wedding at Disney was an experience that really can't be described with words," Greg said. "Its already such a magical place, and I've always looked at Melanie as my princess, so it all just felt so perfect."

Melanie told us: "It was a dream come true to have our wedding at Disneyland. I'm still in disbelief. It was the most magical day and the most wonderful experience. The most magical part of my day was seeing Greg at the end of the aisle, I couldn't get to him fast enough; I wanted to run down the aisle. He surprised me with a horse and carriage to enter my wedding, so when I walked outside and saw this horse and carriage that led me to my Dad to walk me down the aisle, which led me to my new husband, I can't put into words the feeling of joy, happiness, excitement, and magic."

The couple looked unbelievably stunning on their wedding day, reminding us of a real-life Disney prince and princess. See Melanie and Greg's spectacular nuptials ahead!

Related:
What It's Like to Get Married at Disney World (Spoiler: It's as Dazzling as You'd Expect)
Previous Next Start Slideshow
DisneyWeddingReal WeddingsDisneyland

Disney
Disney Collaborated With Latina-Owned Alamar Cosmetics For This Encanto Makeup Collection, and We Can Hardly Contain Ourselves
by Johanna Ferreira 1 week ago

Gifts For Women
18 Black Friday Deals From the Disney Store, Including Toys, Gifts, Fashion, and More
by Anvita Reddy 1 week ago

Family Travel
Disneyland's Toontown Is Closing For a Scheduled Makeover (and a New Mickey and Minnie Ride!)
by Chanel Vargas 1 week ago