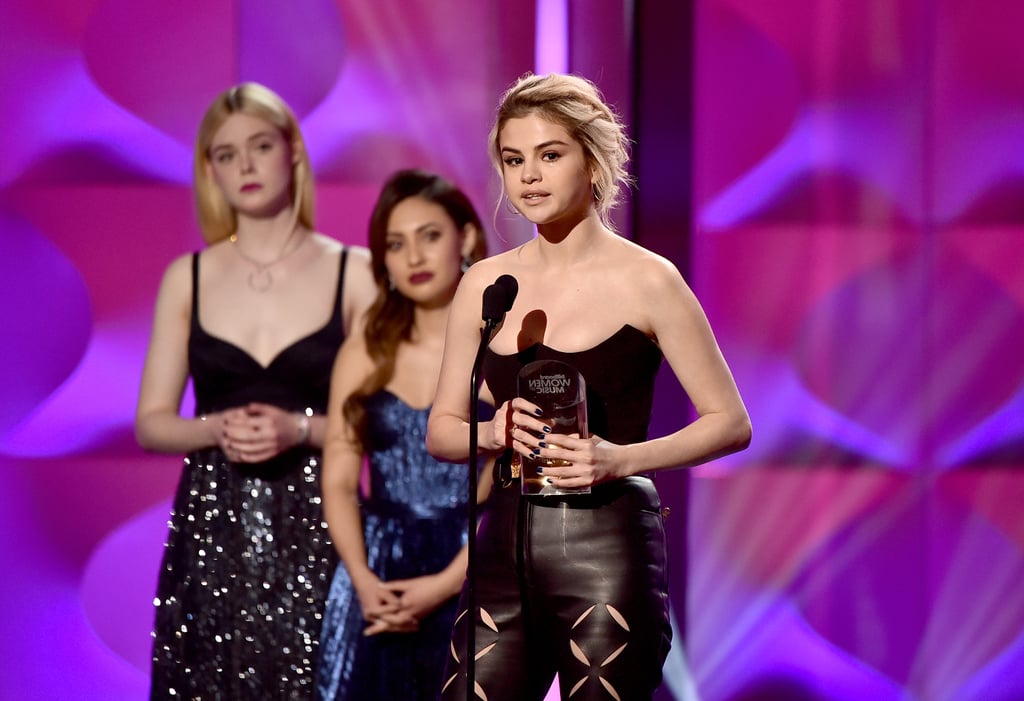 After a transformative year, Selena Gomez was honored as Billboard's woman of the year at the 2017 Women in Music ceremony. The empowering event comes just over a week after the 25-year-old singer performed her song "Wolves" at the American Music Awards. In her emotional and reflective speech, Selena said, "I want people to know that I respect the platform that I have so deeply." She went on to say, "I got to do a lot this year, even though I had a couple of other things to do."

Earlier in the day, Billboard published its interview with Selena, during which she opened up about her recent kidney transplant, industry pressure, and her rekindled relationship with Justin Bieber. Selena didn't go into too much detail about her relationship and personal life, but she did say, "I cherish people who have really impacted my life."

Justin wasn't Selena's date to the award ceremony. Instead, Selena hit the red carpet with her dear friend Francia Raisa, who donated her kidney to Selena this Summer. Immediately after accepting her award, Selena said, "To be honest, I think Francia should be getting this award because she saved my life."

Related:
15 Times Selena Gomez Marched to the Beat of Her Own Drum in 2017
Previous Next Start Slideshow
Selena Gomez Closes Out Her Momentous 2017 as Billboard's Woman of the Year originally posted on POPSUGAR Celebrity News
Selena GomezFrancia RaísaRed CarpetAward SeasonBillboard Women In Music

Dua Lipa
Perhaps You Noticed Dua Lipa's Pearl Orb Choker Necklace? Everyone on TikTok Did Too
by Sarah Wasilak 2 days ago

Maisie Williams
Maisie Williams Bleached Her Eyebrows, Just When We Thought She Couldn't Get Any Cooler
by Jessica Harrington 3 days ago

Balmain
You Must See Rina Sawayama's BRIT Awards Dress From All Angles, but Especially From Behind
by Victoria Messina 3 days ago