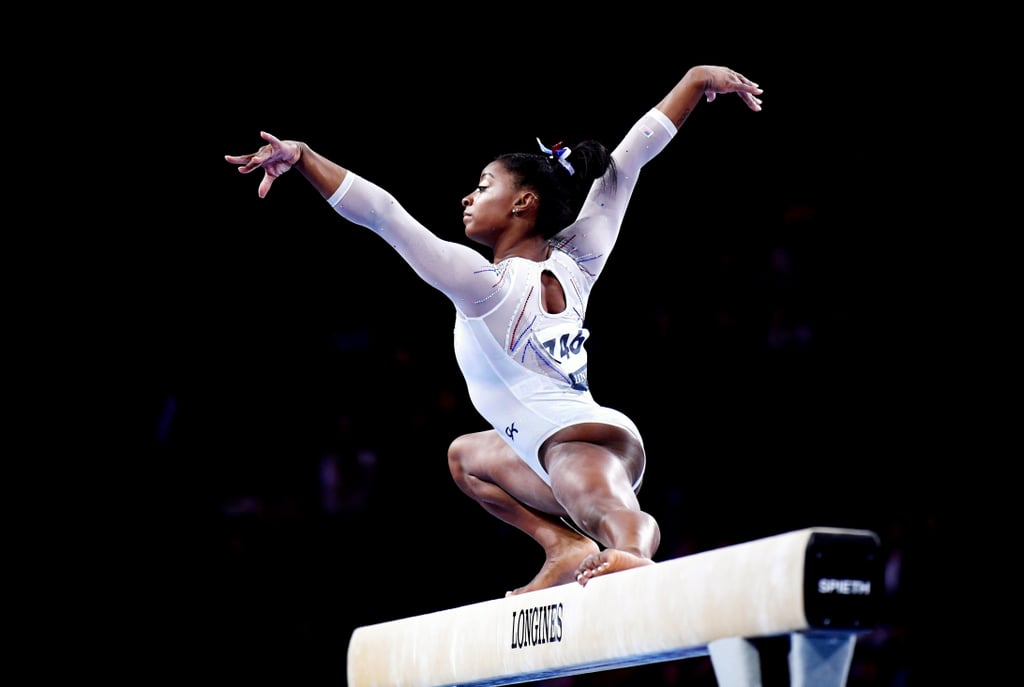 When five-time Olympic medalist Simone Biles won gold with Team USA at the 2019 World Gymnastics Championships on Oct. 8, she said that winning a fifth consecutive team title, adding to the US legacy, "means the world." Now, two days later, she's added on to her own legacy with her fifth all-around victory at Worlds. Simone previously received gold in 2013, 2014, 2015, and 2018 (there was no championship in 2016, and she was still on a 14-month break after the Rio Olympics in 2017), and her 2018 win set a record in women's gymnastics. No female gymnast had ever won four World all-around titles, let alone five.

Simone and teammate Sunisa Lee, who finished eighth in the all-around after a fall on bars, started strong on vault. Simone stayed at the top of the leaderboard the entire competition. In 2018, she won by a record 1.693 points. This time, she scored a 58.999 and won over China's Tang Xijing (56.899) by more than two points. It's a new record under the current scoring system in the women's all-around at the World Championships.

Just like Simone did in the team final, she opted for a full-twisting double back dismount on beam instead of her double-twisting double, which officially became The Biles after she landed it in the qualifying round of Worlds on Oct. 5. She did, however, just like during Tuesday's team competition, bring out her triple-double on floor, soon going into the FIG Code of Points as the Biles II.

Simone said of her fifth title, according to FIG, "I feel like every one just feels so surreal, and every time I come back and I do it, it doesn't feel real in a way." She added that nothing beats the moment you win your first World all-around medal, but she'll go celebrate "just like it was the first time I won."

Yes, Simone continues to have the most World all-around medals on the women's side. But Kohei Uchimura, a Japanese gymnast on the men's side, holds the title for most all-around World gold medals in gymnastics, with six total that he won consecutively from 2009 to 2015 (2012 was an Olympic year so there was no championship). Simone's World medal count has now increased to 22 overall and a cool 16 gold. She has the most total World gold medals out of any gymnast. Hang tight because there are more records to discuss.

Last year, Simone became the most decorated female gymnast at a World Championships due to a tiebreaker with Russia's Svetlana Khorkina — since Simone had more golds than Svetlana, she was given the title. She then solidified her ranking at the very top after winning her 21st medal at the 2019 World team final. Today's performance brought that up to 22.

What's more, Simone now only needs to place on the podium two times to become the most decorated gymnast in World Gymnastics Championship history. That's the most decorated World gymnast out of men and women. The record is 24 medals, currently held by Belarusian gymnast Vitaly Scherbo. And, given that she's competing in all four event finals this weekend — vault and bars on Saturday, beam and floor on Sunday — and her scores are high above the competition, we'll likely witness history being made.

Was that a lot to digest? Maybe. But Simone deserves all the recognition she's worked so hard to receive. Ahead, check out some photos and videos of her during the all-around final, and get excited for more greatness coming your way soon. Pull on your leotard, ready your power pose, and steer clear of the ground if you're barefoot because Simone's about to shatter another record into absolute pieces!

Sports
Paying Tribute to Lusia Harris, the History-Making Queen of Basketball
by Maggie Ryan 4 days ago