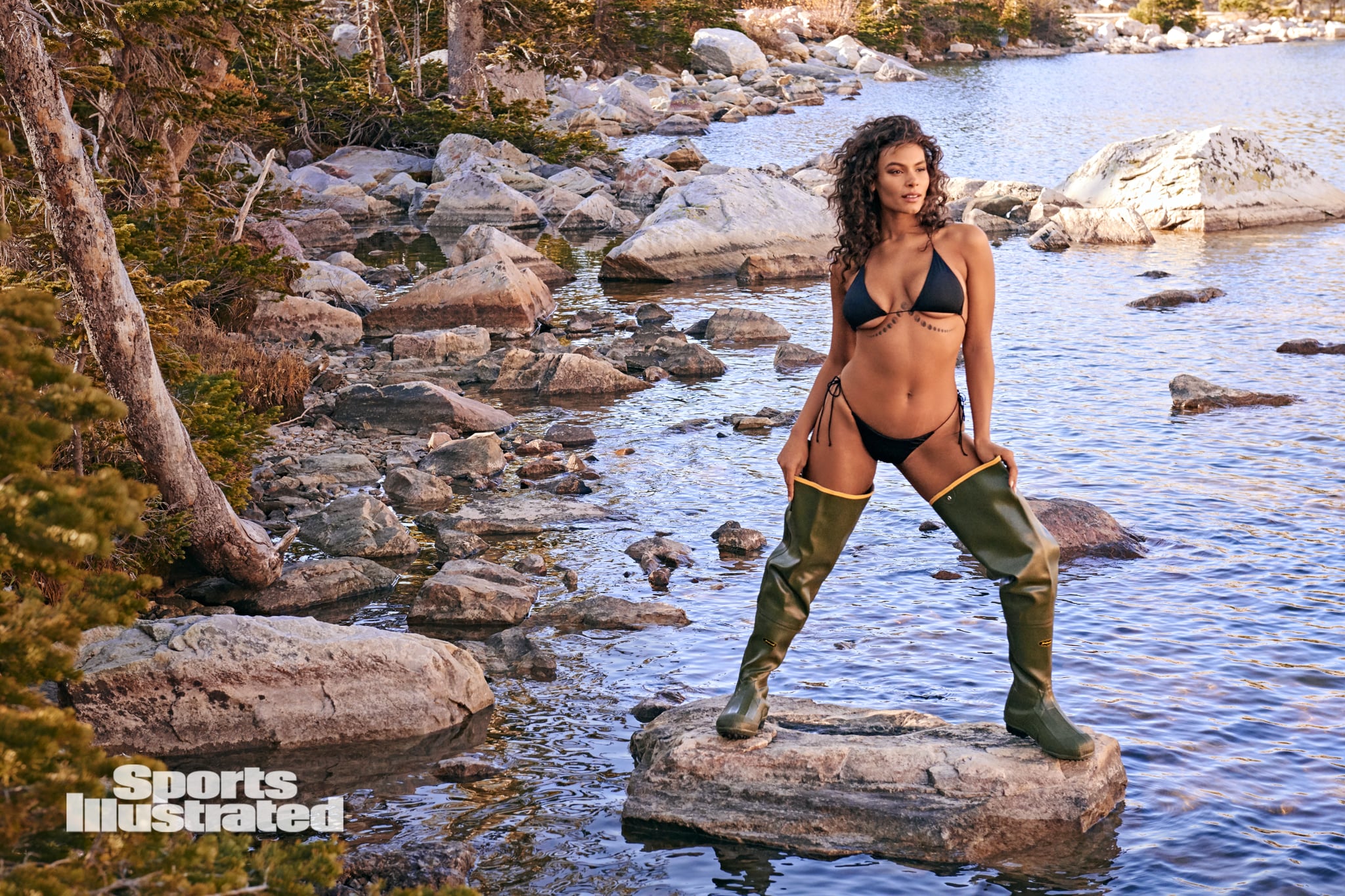 "I'm so overwhelmed right now, it's insane. It's so exciting," Marquita Pring told POPSUGAR about being a 2020 Sports Illustrated Swimsuit Issue rookie. She's been holding in the news for months — waiting for it to be revealed was "painful," she said — and feels a combination of pure excitement and being overwhelmed, "because it's a whole new world for me." With a new reach and audience, her mission is to "use this incredible opportunity" to speak out about social justice, racial justice, and women's empowerment.

As a mixed woman who's struggled with her identity, Pring said talking about race has been a challenge for her in the past, "but I think now, I can't hold back." She's still figuring out how to vocalize her experiences navigating the world, but she said she's ready to put herself out there. In this current climate, Pring emphasized that it's her duty to continue championing for diversity and representation. "That's a huge part of my mission, it's just making sure people understand that it's OK to be different and to see the beauty in people's differences rather than be afraid of it and run away from it."


"It's OK to be different and to see the beauty in people's differences rather than be afraid of it and run away from it."

Pring is invested in empowering women and said, "I think women are absolutely incredible. And to me, I think as soon as you're able to really realize that and understand that, then you're invincible." Her goal is to continue to use her platform to uplift women and inspire women to connect with themselves and stand in their power.

As someone who has firsthand experience of how the modeling industry can be when it comes to diversity and body size, Pring knows how important it is to feel empowered, owning and loving who you are. "At the beginning of my career, it was drilled into us that you had to be a size 14 [or] 16 to have a successful career [as a curve model]," Pring said. Initially, she let those opinions affect her, maintaining a certain size and stopping training in ways she enjoyed, although she "wasn't necessarily the healthiest or happiest version of myself," she explained. Not playing basketball and exercising left her feeling exhausted from just working and not focusing on her well-being, she said, and she knew she needed to return to what made her feel good.

Desiring to be her healthiest and strongest self, "I just began to start taking little steps towards a healthier lifestyle and really just focusing on the kinds of activities and fitness things that I liked," she said, such as riding bikes, being outside, rollerblading, and playing basketball. Pring said she began to take exercising more seriously rather than just doing the bare minimum to maintain her size. "I really started letting my body just naturally become what it wanted to become in a way that I really, really enjoyed," she said. As her body changed, she lost a few clients, but she wasn't fazed. "When you step into your truest, most authentic self and do things that you really, really love, everything just falls into place," she said.

Due to the coronavirus pandemic, Pring said, she's had moments where she thought, "Is this the end?" "What is my career going to come to?" She's slowed down tremendously and been able to be more introspective, asking herself, "What is it that I want in my life, and what skills do I want to cultivate?"


"I really started letting my body just naturally become what it wanted to become in a way that I really, really enjoyed."

Like most people, she is spending more time at home, has been able to catch up with friends virtually, has purged her apartment, and has spent time focusing on simple things that she's neglected. "I think that all added to a healthier mental health. It really just helped me focus on what was important to me, like the friendships that I have, the people that I want in my life, the friendships that I want to continue to cultivate," she said. Pring described the pandemic as "traumatic" and "devastating" but said she's also been able to find the positive in it by getting to know herself more.

She's spending more time in nature, and as things begin to open up, she's learning to not overcommit herself and to maintain boundaries. Pring is taking things day by day without any expectations and is fully committed to living in her truth and being 100 percent unapologetic as she pursues her goals.

Healthy Living
This Weighted Blanket Is Heated, and OMG, Where'd My Stress Go?
by Jenny Sugar 21 hours ago

Healthy Living
From HIIT to Yoga, Here's How to Work Out, According to Your Menstrual Cycle
by Lauren Pardee 1 day ago