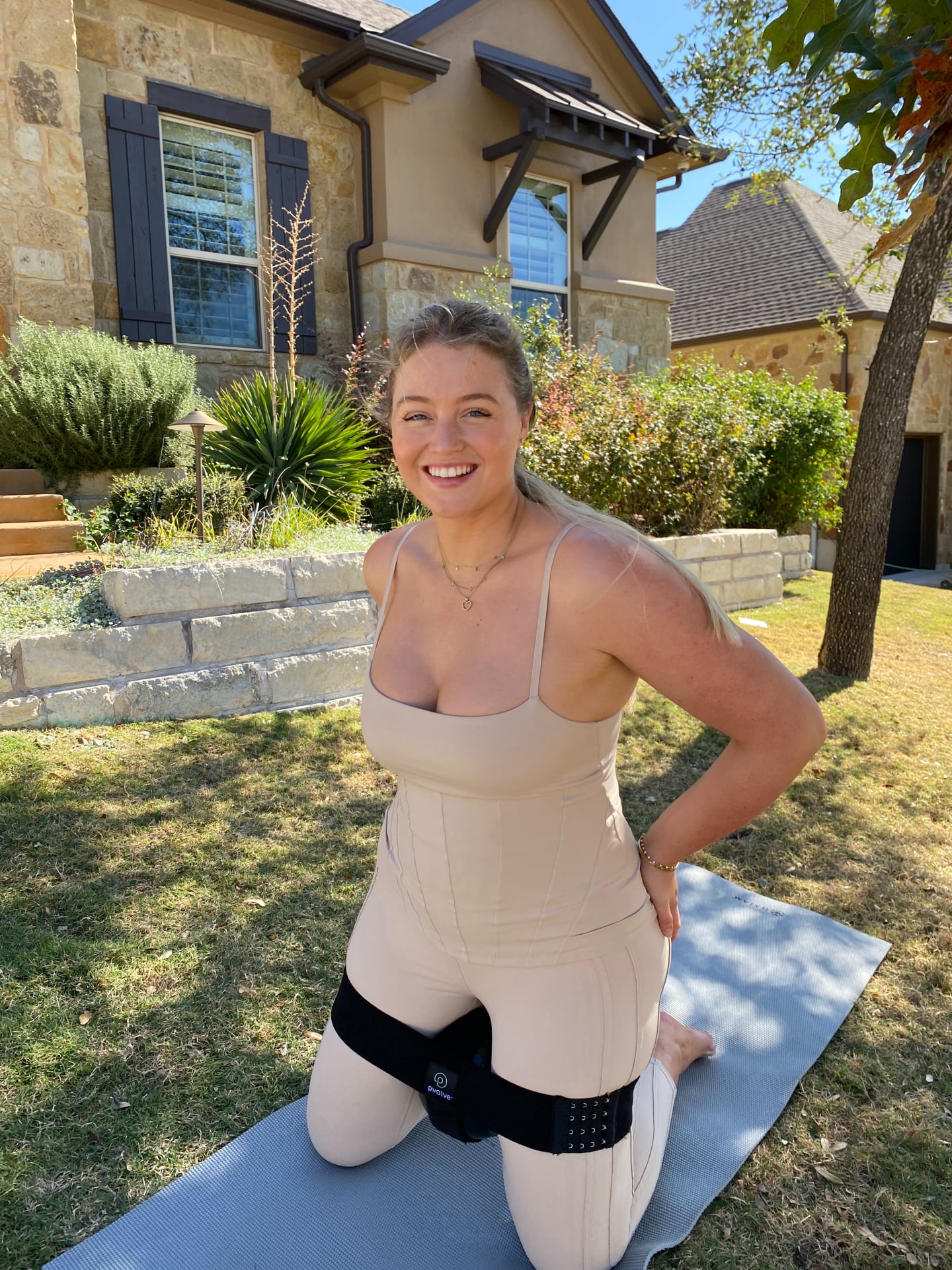 After model Iskra Lawrence gave birth in April, she went back to fitness with a body that she described as unfamiliar and new. Her priorities changed, naturally, and she admits that her workout routine differs from one week to the next — last week, for example, she was getting up with partner Philip Payne to exercise at 5 a.m., but there are times when she can't fit a sweat session in until her baby goes to bed. Most importantly, she told POPSUGAR, "I don't feel guilt and shame around that."

A program that Lawrence counted on this year is P.volve, which is different from the HIIT workouts she used to go for but still incorporates high-intensity exercises with a low-impact twist using resistance. She started with postpartum-friendly sessions at home, working with P.volve trainer Celestine Atalie, and progressed after that, describing the routines as "moving with purpose."

Lawrence said of her body post-baby, "Everything has changed, so refiguring that out . . . that made me feel insecure about my fitness level. I really had to figure out how I could find something that helps me feel welcomed and made me feel like I had the ability to be able to start somewhere."

Related:
Iskra Lawrence Not Fitting in Her Jeans Holds a Powerful Message: Your Body Will Change

Her entire viewpoint toward fitness, too, changed over the years after going though an eating disorder and recognizing her body dysmorphia, at which point Lawrence said she was solely focused on aesthetics and "simply trying to burn fat and lose weight." The goal wasn't about anything else. She explained, "I was literally running on a treadmill and just having the calorie thing on and being like, 'Hey, have I burned enough? Have I burned more calories than I've eaten?' It is a very damaging way to think about fitness and movement because there's so much more reward than that when you do move your body. It's about encouragement, it shouldn't be about punishment."

"I had no idea when I was looking in the mirror and grabbing parts of my flesh and trying to pull them back to look slimmer that, that was a mental illness."

Getting away from that mindset was hard for Lawrence because of constant messaging she is (and we all are) fed from society and mainstream media. "Literally, I went in the other day to our local store, and I showed my partner and I said to him, 'Can you believe there's still magazines with a front cover saying to lose 40 pounds before the holidays?!'" she recalled, noting that she often gets lost for words because she's so fired up over this topic. She also pointed to hyperbolic language, like "let the fat just fall off," that she said is downright baffling.

"Working out feels really good, and I feel really great after. I get accomplishment, fulfillment, and energy, and that's what I want to focus on," Lawrence stated, adding later on in the interview that she used to have a notebook where she recorded measurements for every single part of her body down to the half millimeter. "I had no idea when I was looking in the mirror and grabbing parts of my flesh and trying to pull them back to look slimmer that, that was a mental illness," she shared. She learned about body dysmorphia online and realized, looking back, "when you're in the thick of things like that, you just have no idea."

The media, Lawrence said, still doesn't discuss eating disorders and body dysmorphia enough, and she wants more people to feel comfortable opening up about their experiences. In general, having a negative relationship with your body or with food is something that many of us have dealt with at some point, she noted. While these feelings might not equate to a clinical diagnosis, they're way too familiar and way too frequent. 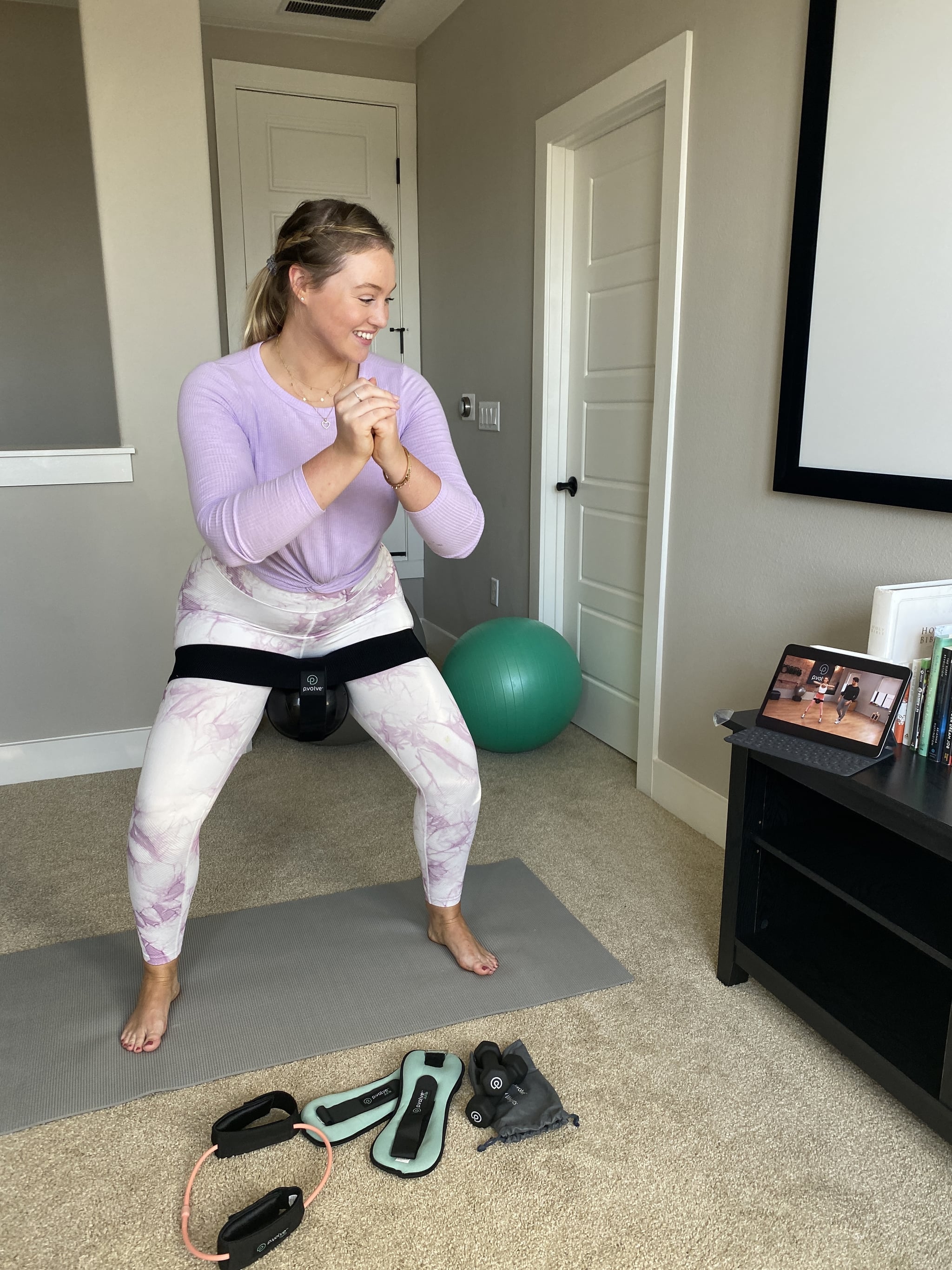 Iskra Lawrence Says Your Body Is Your Home

"I'm terrified but excited to hopefully teach my child that they're worthy and that they are capable of anything and that their body is a gift and it's their home," Lawrence said. She recalled that she was inspired by a man she met in Minnesota while working with the National Eating Disorder Association, who finally realized that falling into a cycle of criticizing his body was never going to make him happy.

"Working out feels really good, and I feel really great after. I get accomplishment, fulfillment, and energy, and that's what I want to focus on."

"He said he got to the point where he was like, 'I'm going to continuously move into these different houses. How do I make this house my home?'" Lawrence explained. And that concept of comparing your body to your home has stayed with her ever since.

Lawrence continued, "I really hope more people will think [of their bodies], 'Wow, I love my home. I like being in my home. I want to make it more homely, and I want to enjoy all the moments that we have together and we share. And yeah, I'm going to live and be grateful for it.'" She encourages you to write down non-aesthetic goals for your body, whether it's to build strength, run up stairs, or carry your child around with ease.

Lawrence also recommends unfollowing toxic accounts on social media and replacing them with people who depict realistic body standards when it comes to fitness (shout out to Meg Boggs, whom Lawrence highlights as an example). "Those types of people . . . bring them into your feed," she said. "Bring that kind of messaging into your life, and it will help you change your mindset."

Healthy Living
With 6 Months Until the Paralympic Games, These Are the Athletes We Are Excited to Watch
by Christina Stiehl 4 days ago

lululemon
Orangetheory Released a Lululemon Apparel Collection, and Yes, There Are Leggings
by Maggie Ryan 5 days ago

Healthy Living
Black Olympic Athletes Reveal What Brings Them Joy, and It's Not Always a Gold Medal
by Christina Stiehl 5 days ago