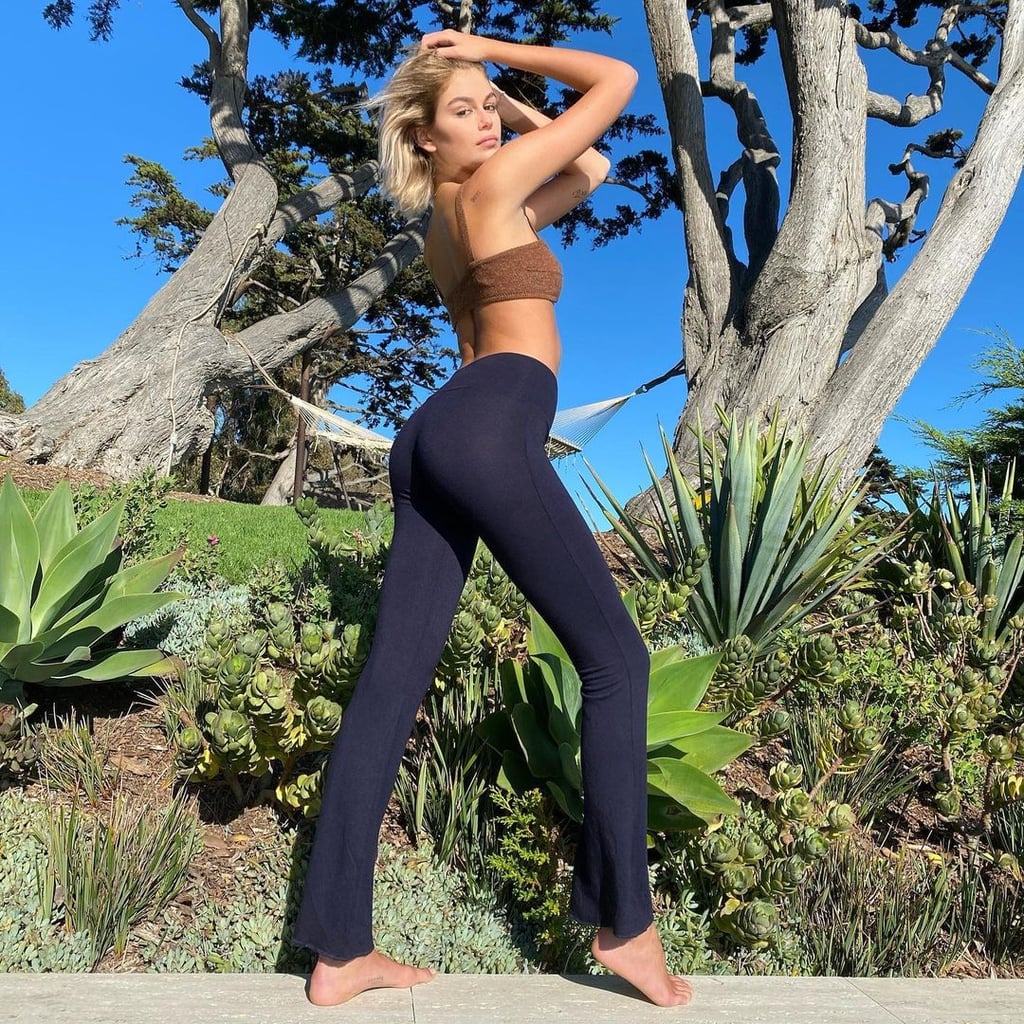 Nothing ages you quite like the return of a piece of clothing that you swore you'd never wear again. But here we are 20 years later, in 2021, talking about flared yoga pants, which have seemingly appeared out of nowhere and are suddenly beloved by just about everyone, from rising Gen-Z influencers to veteran fashion editors.

Some light internet sleuthing reveals that the source of this comeback can be traced back to Kaia Gerber, who partnered with sustainable luxe basics brand Bleusalt last August to launch a pair of glorified yoga pants crafted from cashmere-alternative fibers, appropriately named "The Kaia Pant." But the biggest instigator looks to be Emma Chamberlain, who single-handedly resurrected the early-aughts relic with all her mighty #influence when she tweeted in October: "is it bad that i want flare yoga pants and uggs to come back im so sorry but it was so comfortable please."

A few days later, like clockwork, Chamberlain posted a mirror selfie on her IG Story featuring a pair of yoga pants worn with a gray boxy Nike sweatshirt, slim-framed sunglasses, and a stretchy white headband (remember those?). And as if that wasn't enough to bring it back, she posted another yoga pant-centric fit pic on Instagram, styling it with a mock-neck crop top, chunky sneakers, and an oversize red jacket shrugged off her shoulders. That moment definitively marked the yoga pant's return. The rest, as they say, is history.

From there, TikTok users became obsessed with them, as did teen celebrities. "I really love I.Am.Gia.; I have a couple pieces in my cart that I want to purchase — the cool pants, the black yoga flared pants with the ties on them," said Lexi Underwood, the 17-year-old star of Little Fires Everywhere, in a recent interview. "They're super soft, you can stretch in them, and they're not tight. Just the flare at the end adds that aspect of 'I'm comfortable, but I'm still cute.'"

That's just it — in our quest to become comfortable, eschewing hard pants in the process and cocooning ourselves against the harsh realities of the world, we've turned over and exhausted every soft, stretchy piece of clothing so that we have no choice but to begin the cycle all over again. And when repackaged (championed by the aforementioned teen influencers), reimagined (with hip-baring cutouts, a gathered waistband, or a circular buckle), and rebranded (as "flared leggings") for a whole new generation, said garment feels shiny and brand new.

Still, it's hard to get on board when you've experienced it the first time around — at least for me, a non-teen, that is. Back then, yoga pants — despite never actually being worn to yoga — rose in popularity after shredding the hems of one too many pairs of flared jeans, which were unfailingly worn several inches too long and slung far too low on the hips. Yoga pants were like the precursor to leggings in an era when athleisure didn't exist and workoutwear had no place outside the gym. They were almost always paired with flip-flops and styled with baby tees, spaghetti-strap tank tops, or shrunken cardigans.

The 2021 version of yoga pants are more flattering, I have to admit. The rise is higher, the fabrics are better, and when styled with a 2021 outlook, like with oversize sweatshirts, sleek jackets, or nothing but a knit bralette, the outcome is — I'll be the first to say it — cute. Would that make me a yoga pant convert once more? A reconvert? Upon introspection, perhaps it's not the item itself that I'm wary of, but more the fact that yoga pants represent a period in my life marked by teenage awkwardness, uncertainty, and paralyzing self-doubt. I associate yoga pants with velour Juicy Couture sweats, platform flip-flops, Von Dutch trucker hats, skinny scarves that serve absolutely no purpose — and, oh god, what if all those come back, too?

They say fashion is indeed cyclical and what's old is new again. With that in mind, shop some of our favorite new-and-improved flared yoga pants below.