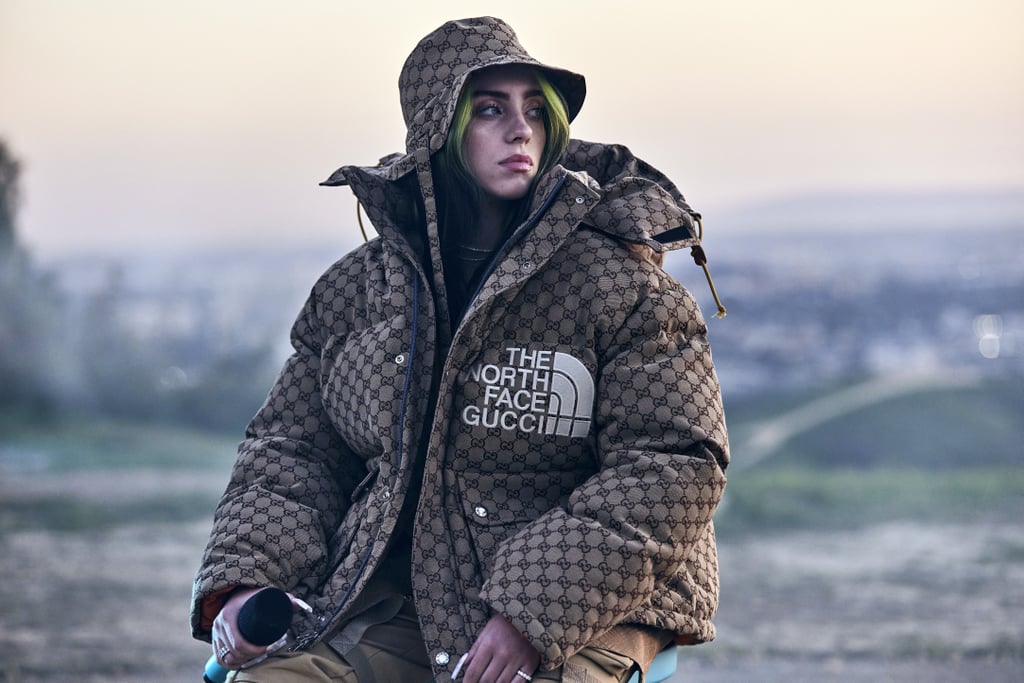 Billie Eilish's closet is filled with bright, comfortable, monochromatic designer ensembles, and on Feb. 25, she rocked a highly coveted coat that we can't stop gawking at. During the premiere event for her Apple TV+ documentary film, Billie Eilish: The World's a Little Blurry, the 19-year-old powerhouse pulled out the trendy puffer jacket from Gucci and The North Face's collaboration. Billie paired the camel GG canvas down coat with a matching Gucci bucket hat, beige pants, and a Gucci T-shirt. It's no wonder that Billie chose that coat for her big premiere — ever since the collection released in January, it's been sought after by celebrities like A$AP Rocky and street style fanatics alike.

With the release of her documentary, Billie announced a new clothing collection including sweatshirts, socks, T-shirts, and sweatpants that she designed to reflect the film's message. In an Instagram post, she shared that every item (with the exception of the socks) was made from organic fabrics grown without pesticides in the US in order to support the local economy and save on international shipping costs.

Check out photos of Billie rocking the Gucci x The North Face puffer jacket ahead, and make sure to check out her documentary on Apple TV+ starting Feb. 26.

Related:
Billie Eilish Just Took Me Back to the Days of the Ultra-Rip Jean, and Somehow I Feel More Whole
Previous Next Start Slideshow
Billie EilishThe North FaceGucciCelebrity StyleCoatsOuterwearDocumentariesStreamingDesigner Collaborations