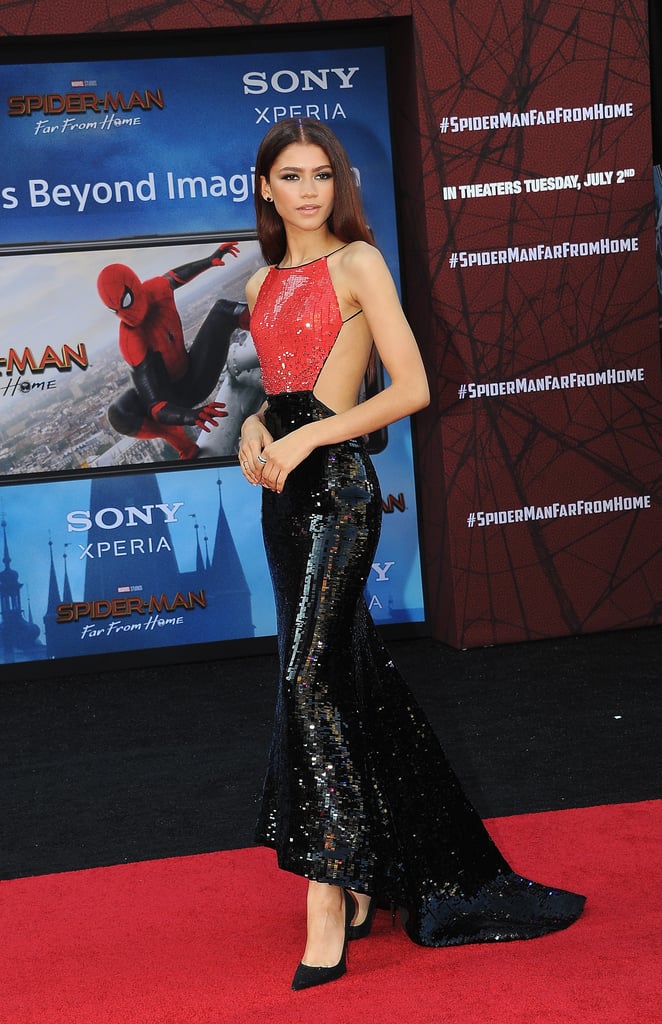 "If she was Spider-Man, this would be her suit," Zendaya's stylist, Law Roach, commented on Instagram. For the premiere of Spider-Man: Far From Home, Zendaya wore a sequinned backless gown by Armani Privé with sparkling black pointed-toe Louboutin heels. Her red and black dress was channeling the iconic red and navy suit worn by Marvel's Spider-Man.

It's been a great year for Zendaya's television and film career. In addition to her starring role as MJ in the Spider-Man: Homecoming series, she's currently filming for the remake of Dune, to be released in 2020. Television-wise, Zendaya's been dominating the headlines with her lead role as Rue Bennett in Euphoria, and a cameo in the second season of The OA.

While her acting career has been reaching new heights, so has her presence as a style icon and role model. The Disney graduate has fully blossomed into one of the most elegant red carpet regulars. Just take a look at the couture butterfly dress she wore to the premiere of The Greatest Showman, or the ruched chocolate gown at last year's Oscars. For her latest foray as one of the most impeccably dressed women in Hollywood, check out every angle of her superhero-inspired look ahead. Then, take a look at her amazing afterparty gown, too.

Related:
Zendaya Was Cinderella at the Met Gala — No, We're Serious, She Literally Was
Previous Next Start Slideshow
ZendayaRed CarpetArmaniChristian LouboutinCelebrity StyleAll AnglesDressesSpider-Man: Far From Home