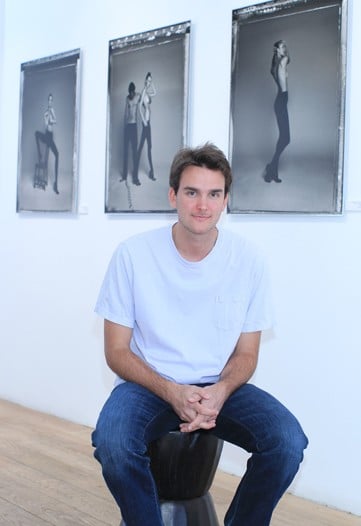 >> Victor Demarchelier's first solo New York show, "Creating Images," opens today at Clic Gallery, featuring 20 pieces taken over the past few years. Demarchelier, son of Patrick Demarchelier, describes the mostly black-and-white collection as "very personal" — works included range from a still-life shot of his childhood teddy bear to a number of topless photos of Caroline Trentini, his girlfriend of three years, of whom he says: “I’ll tell her about a shot before we go to the studio and then two out of three times she says ‘No.’”

Victor, 25, who has photographed for Vogue Paris, Interview, and 25, only minimally retouches his images: “I like when they’re rough. I don’t always spot them; that way they’re more like a piece of art. The accidents can be beautiful, too.”  And he currently shares a studio space in Chelsea with his father.  “We like to talk to each other while the other one is shooting. Sometimes we definitely get on each other’s nerves,” he laughs.