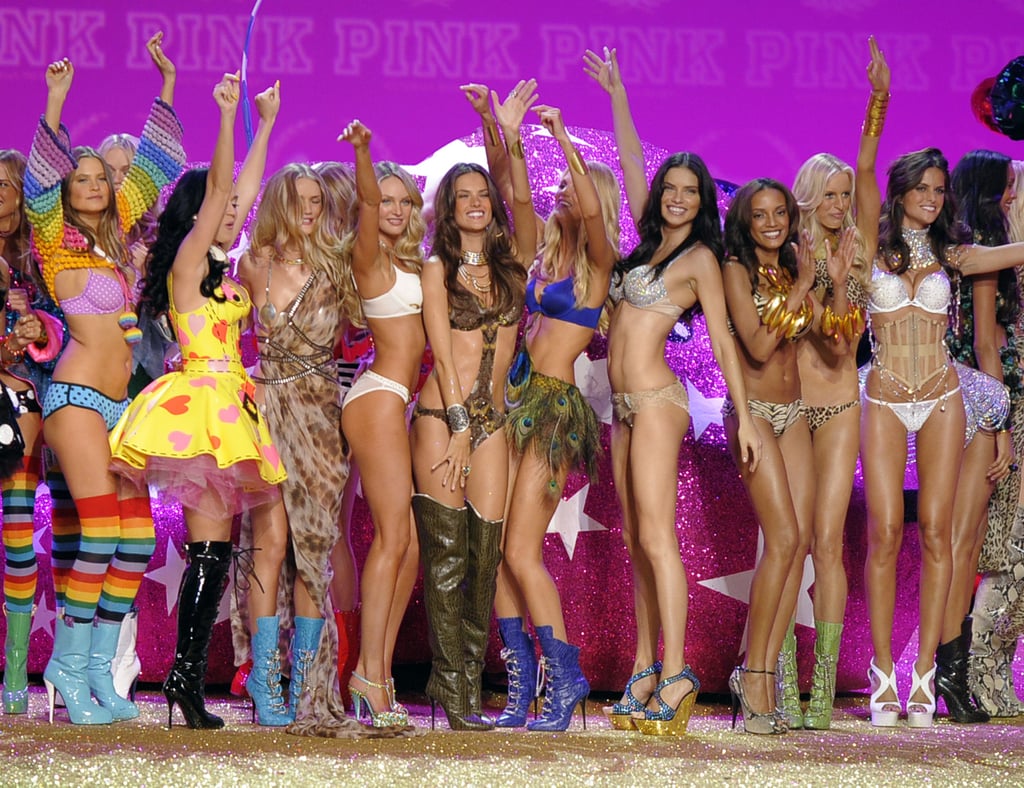 >> Anne Vyalitsyna peeked out in a pink robe and waved at the crowd gathering at the 69th Regiment Armory in New York, where the 2010 Victoria's Secret Fashion Show was taped this evening in front of an audience that included Carine Roitfeld, Giovanna Battaglia, Alexander Wang, Zac Posen and his boyfriend Christopher Niquet, Kate Lanphear, and Julia Restoin Roitfeld. Then, an announcer came on, asking that cell phones be stowed: "Frankly, if you need to use those devices at a show like this, you've got other problems."

Lais Ribeiro, Jacquelyn Jablonski, Lily Donaldson, and Heloise Guerin all walked for Victoria's Secret for the first time today, but it was Angel Adriana Lima who opened the show, riding a twirling carousel to make her debut in the first, "Tough Love"-themed segment (She and Karolina Kurkova both made their return after skipping last year's show while pregnant.). It was the first of many minor obstacles the 33 models had to maneuver through during the show, all while smiling and waving to the crowd. In the sporty "Game On" segment, while twirling her ribbon stick, Izabel Goulart, got the ribbon stuck around her neck and had to untangle herself; Candice Swanepoel estimated her "Heavenly Bodies" wings weighed half of her body weight — "It’s like driving a car because they’re so far away from my body. I have to turn them before I turn my body. It’s an honor to get them. I told my trainer, ‘You better prepare me for this! We’ve been doing some extra push ups!’”; Anja Rubik, too, had expansive wings in the "Heavenly Bodies" — turning at the end of the runway with all those streamers deserved applause in itself; and in the final, "Pink Planet" segment, mylar balloon rained the runway from above, causing Maryna Linchuk and Jacquelyn Jablonski to have to kick them out of the way to get down the runway.

But there was plenty of fun to be had — Isabeli Fontana, who closed out the "Game On" segment, hammed it up for the cameras with her dumbbell prop, and Lily Aldridge had the support of her fiance Caleb Followill and the rest of Kings of Leon, front row. In the next section over, Anne V's boyfriend Adam Levine and the rest of Maroon 5 gave her a standing ovation as she made her first runway appearance — which Anne rewarded with a blown kiss.

Akon and Katy Perry both performed — him appropriately singing "Angel," and her singing "Teenage Dream" for the younger, Victoria's Secret Pink-themed segment. And Chanel Iman closed the show in bubble wings with a bubble-squirting gun. The final cut airs Nov. 30 on CBS.