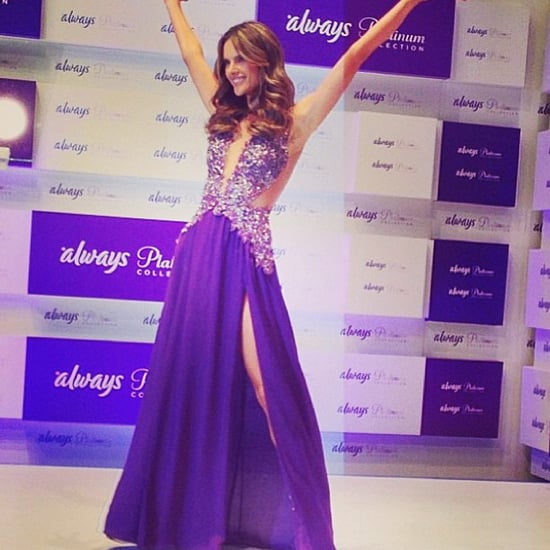 Before you fly off the handle about the odd news that Alessandra Ambrosio has signed on as the face of Always Maxi Pads, consider that she's far from the only fashion model to pose for something that wasn't clothing, fragrance, or accessories.

Case in point: Naomi Campbell once helped hawk a luxury condo building in Russia, and Kate Upton is currently the face of a product she'll probably never use: men's razors from Gillette. So it really shouldn't come as a surprise that Ambrosio has decided to back Always's new Platinum Collection, which boasts a "silk-like top-sheet" and "superabsorbent gel" core.

Naomi Campbell For the Legend of Tsvetnoy

In late 2010, when she was still involved with Russian real-estate billionaire Vladimir Doronin, Naomi Campbell starred in a commercial for one of his luxury condo developments known as the Legend of Tsvetnoy. After enjoying the building's amenities, Campbell looks out the window of her unit and says, "I listen to your heart, Moscow. Now you know where I stay."

Here's to you, Mrs. Robinson. In this commercial for Carl's Jr. — a decidedly out-of-character endorsement for a woman who reportedly pays her children to eat healthy — Klum seductively feeds a young man a bite of the fast food chain's Jim Beam Bourbon Burger. Everything in moderation, right?

By the end of this commercial, a woman who is annoyed by her boyfriend's vehicular ineptitude gets transformed into a supermodel (namely former Victoria's Secret model Selita Ebanks) through the magic of the State Farm jingle.

Who could forget the uproar caused by this 2013 Super Bowl commercial — some people called it "unbearable" — featuring Bar Refaeli making out with actor Jesse Heiman. "I'm happy to represent the fat guy or the nerd guy," Heiman said of his work in the ad.

In her role as a spokeswoman for Gillette, Kate Upton has made more than one video in which she highlights how important it is for men to groom "down there."

Celebrity Families
Gabrielle Union on Zaya Coming Out as Trans: "It Was Just a Beautiful, Full-Circle Moment"
by Murphy Moroney 9/24/20

Naomi Campbell
Did You Catch These Fun Celebrity Cameos in Beyoncé's Black Is King?
by Brea Cubit 7/31/20

The Late Late Show with James Corden
Naomi Campbell, Olivia Munn, and More Take "Celebrities, They're Just Like Us" to a Whole New Level
by Grayson Gilcrease 5/14/20