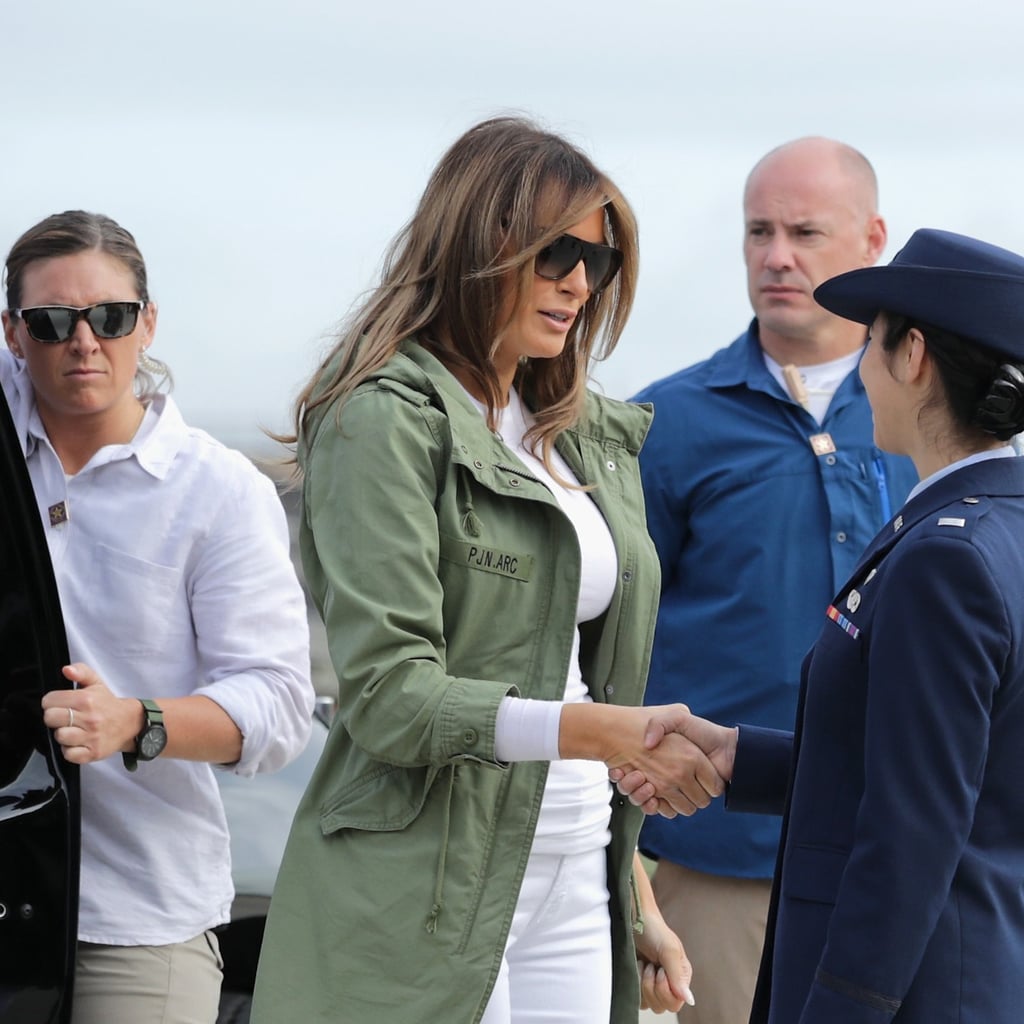 Melania Trump is certainly no stranger to stirring up controversy with her outfit choices. The first lady famously wore sky-high stilettos while visiting Hurricane Harvey victims last year, the internet still hasn't forgiven her for sporting a $1,380 Balmain shirt to a hands-on gardening event at the White House, and who could forget the time she wore a bright-pink pussy-bow blouse just days after footage surfaced of her husband instructing Billy Bush to "grab" women by that very private body part?

The FLOTUS's latest style move, however, might just take the number one spot as her most questionable one to date. On June 21, Melania made a surprise trip to Texas to visit facilities that house migrant children following a firestorm of backlash to Trump's inhumane migrant family separation policy. While boarding the plane to head toward the US-Mexican border, she wore a white long-sleeved shirt, white jeans, and Adidas sneakers, finishing the look with the tone-deaf pièce de résistance: a green parka that read "I Really Don't Care, Do U?" in enormous white lettering on the back. Yup, you read that correctly, folks. Appalling is an understatement.

Related:
Keeping Up With Melania Trump's Outfit Controversies Is a Full-Time Job

The hooded Zara jacket, which is no longer available for purchase on the retailer's website, seemed to send a loud-and-clear message as the first lady boarded the plane with cameras right there to capture the moment. Thankfully, she did swap out the distasteful outerwear for a blush-pink number once she touched down in Texas, but it was too late: the internet already took note and started expressing outrage over the insensitive move.

Melania's spokesperson, Stephanie Grisham, soon after responded to said outrage on Twitter, writing, "If media would spend their time & energy on her actions & efforts to help kids - rather than speculate & focus on her wardrobe - we could get so much accomplished on behalf of children. #SheCares #ItsJustAJacket." Ahead, see Melania's green jacket in action, followed by a handful of Twitter reactions.

Storm Reid
Storm Reid Loves Her Cherry-Red Pantsuit So Much, She Put on Beyoncé to Mark the Occasion
by Chanel Vargas 2 days ago

The Royals
Queen Elizabeth's Sapphires Date Back to 1850, but Here They Are Looking Splendid as Ever in 2020
by Sarah Wasilak 2 days ago

Billie Eilish
Billie Eilish Stresses Over the Color of Her Sneakers, and It Will Make You Crack Up
by Sarah Wasilak 3 days ago