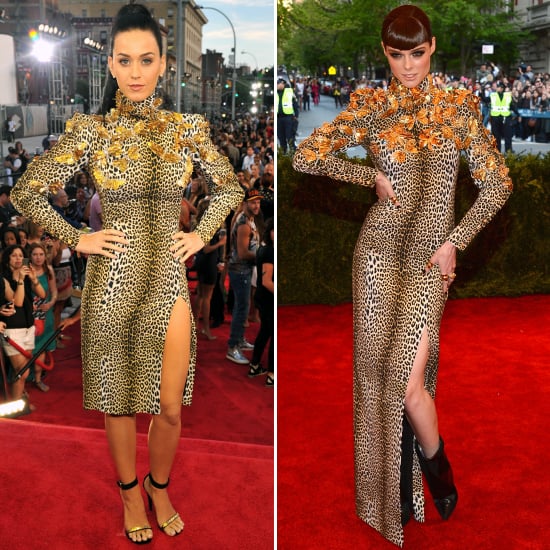 We thought we'd seen that gold-spangled, leopard-printed Ungaro dress Katy Perry wore to Sunday night's MTV Video Music Awards somewhere before — and it turns out we were right! Supermodel Coco Rocha, who also made an appearance on the red carpet, both tweeted and posted an Instagram video saying Perry chose the same dress, designed by Ungaro's Fausto Puglisi, that she slipped into for the Met Gala in May.

When Rocha wore it earlier this year, the dress fell all the way to the ground. But Perry's version was shortened to fall right to her knee. We're glad the singer made it her own, but it leaves us with one question:

Mindy Kaling
Mindy Kaling Is Having a Lot of Fun With Her WFH Outfits, and We Wouldn't Expect Anything Less
by Nikita Ramsinghani 3 days ago

Billy Porter
Billy Porter Asked Fans to Re-Create His Met Gala Outfit, and the Outcome Is Spectacular
by Nikita Ramsinghani 4 days ago