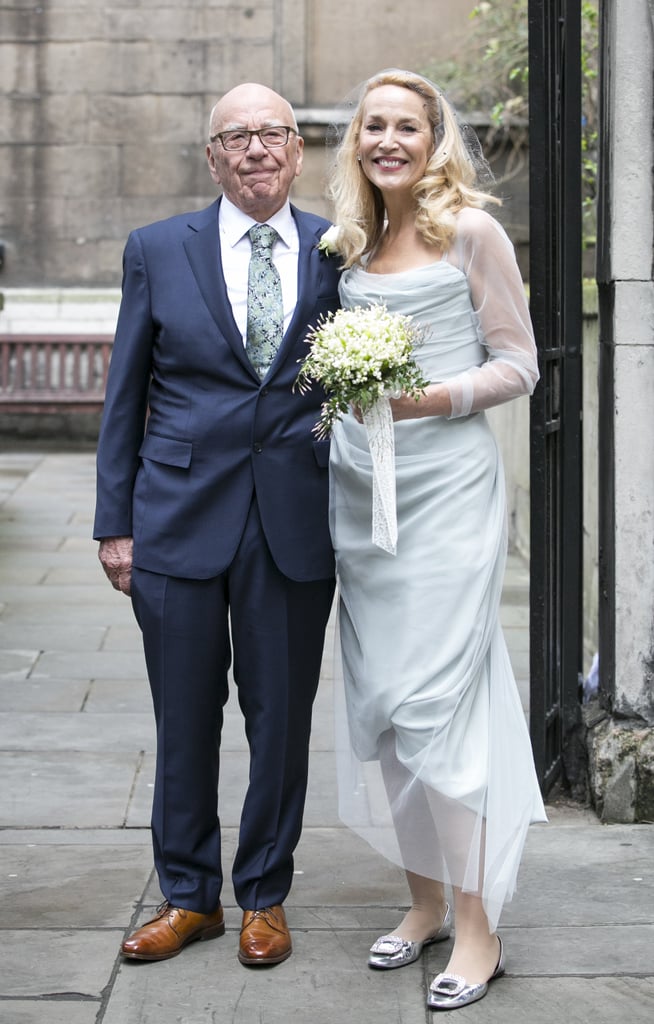 Jerry Hall's wedding to Rupert Murdoch was a two-day affair in London in early March. For their civil ceremony on Friday March 4, Jerry wore a navy blue cocktail number and flats. We had a feeling that was a subtle hint about the color scheme for the second ceremony, which took place the following day at St. Bride's Church.

For her big ceremony, Jerry was dressed in a sweeping chiffon creation by Vivienne Westwood — who's as iconic a designer as Jerry is a model — and the look came complete with an embroidered hairnet. But of course, there's more style where that came from. Jerry completed her baby-blue design with silver Manolo Blahnik flats, while her daughters Georgia May Jagger and Elizabeth Jagger (from Jerry's relationship with Mick Jagger) wore sparkly, strappy Aquazzura shoes. Georgia May and Elizabeth's bridesmaid gowns were a bit brighter in shade than Jerry's silhouette, but the nod to fashion at this wedding was obvious — even Rupert's floral tie complemented the hue.

And just a little more than a week after the wedding, Jerry pulled what is possibly the most relatable bride move — she shared a photo from her big day on social media. Posting a picture taken by photographer David Bailey of her special day, Jerry wrote on Twitter, "My beautiful family!" Featured in the snap were her four children from her relationship with Jagger, as well as Rupert's children and their spouses. Beautiful family — and fashion — indeed.