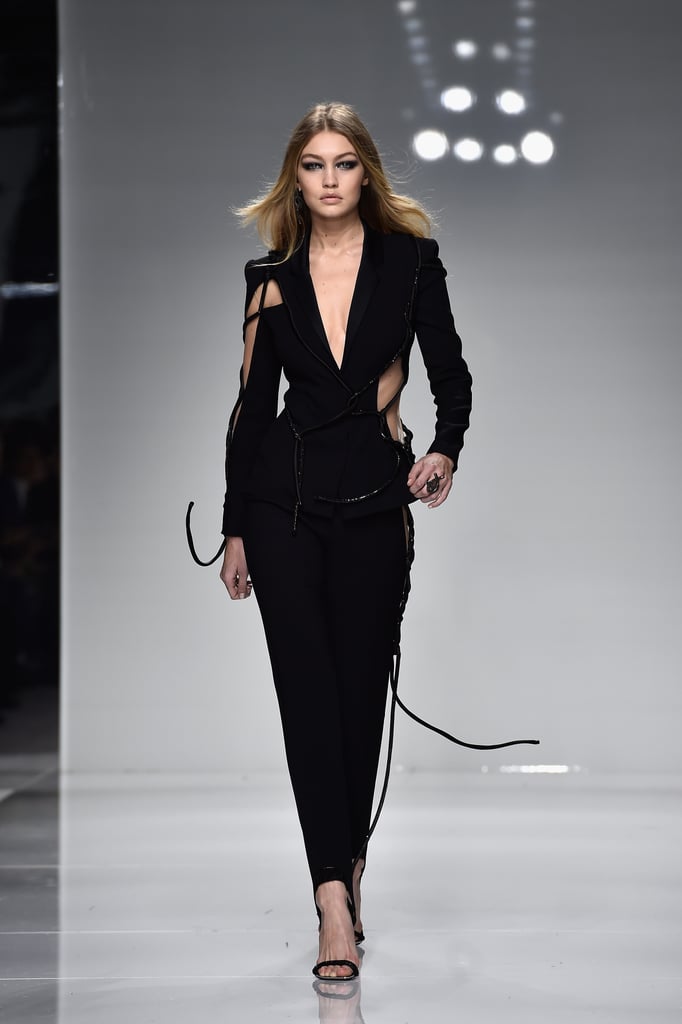 Gigi Hadid Is Back on the Versace Runway — and Boy, Are We Glad

Gigi Hadid has landed in Paris for Haute Couture Week, and after showing off some solid street style and uploading a celebratory snap to Instagram, she finally took to the Versace runway. As the face of the brand, Gigi had a big role to play in Donatella Versace's Spring '16 presentation: she wrapped the show, following in the footsteps of Rosie Huntington-Whiteley, Behati Prinsloo, Stella Maxwell, Joan Smalls, Irina Shayk, Lara Stone, and Natasha Poly, and debuted a crisp black suit with sparkling, spindly details.

Glittering Swarovski ropes like the ones Gigi wore ran throughout the entire collection, twisting along the cutouts of sexy dresses and adding movement to skintight designs. But there were plenty of floor-sweeping, red carpet-worthy gowns, too — of course, none without the addition of a dramatic slit. Read on to admire Gigi's look, along with those of the other supermodels, and see the BTS photo Donatella shared on her own feed.

Billie Eilish
Billie Eilish Designed Clothing That Celebrates Sustainability: "This Is So Important to Me"
by Karenna Meredith 1 day ago

Fashion News
Brother Vellies Is Launching Sneakers, and Aurora James Gave Us a Sneak Peek
by Nikita Charuza 1 day ago