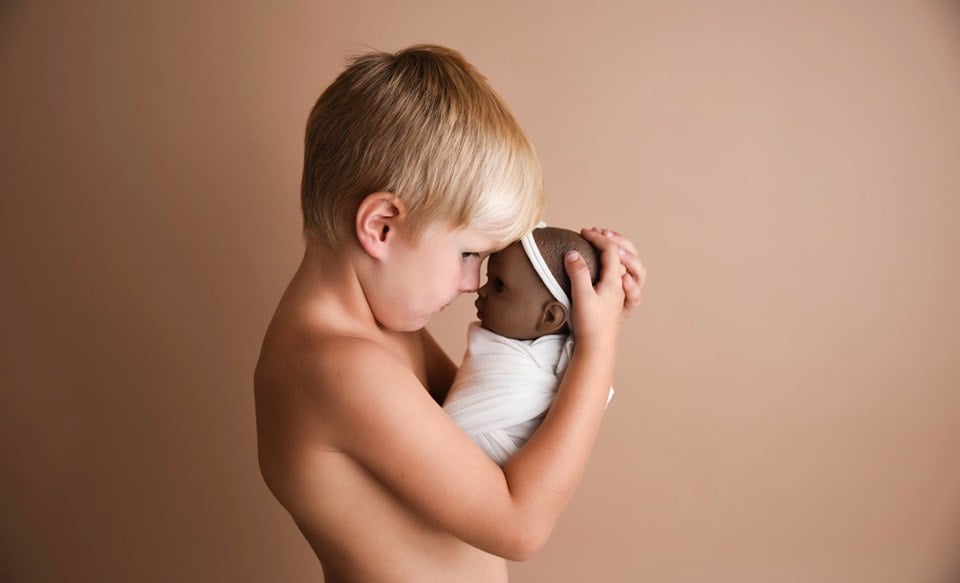 When Ashley Fitz's son Jynsen came to her asking if she'd capture a few pictures of him and his baby doll, she knew she had to pull out all the stops. As the owner of Ashley Mae Photography, the Shelbyville, IN-based photographer put her skills to good use. After sharing the endearing results on Facebook, the photos quickly went viral, proving that dolls can be little boys' best friends, too.

"My husband is in the military and when he deploys I like to take our boys to Walmart to get them something special to brighten their day or make them feel a bit better," Ashley told POPSUGAR. "As we were looking at the 'boy toys,' Jynsen wandered over to the doll section. He told me he wanted a baby doll, and pointed to Three — the name of his new BFF — and even picked out a stroller and some bottles for her."

"There is nothing wrong with him playing with a doll, and one day he will make a very caring and nurturing person — and maybe one day a dad if that is what he chooses to become."

Although Ashley isn't sure where the name Three comes from, there's no denying that Jynsen has a special bond with her. One day, Jynsen asked Ashley if she could stage a photo shoot, and she went into full-gear. "I wrapped Three up nice and tight in a stretchy wrap and gave Jynsen a bit of guidance during our session," explained the mom of three. "He is used to being in front of my lens and is quite the natural model, so this session was a bit typical, we just added his 'baby' into the mix.

Ever since the photos series went viral, Ashley has gotten a ton of feedback that's both kind and mean-spirited. "While we are receiving an abundance of love from so many people from all over the world we have also received some negative comments and even messages about him playing with a doll — and a doll of a different race — but I always stand up for him and I always will," said Ashley. "I am teaching him to love no matter the color. I am teaching him to stand tall when you need to."

While Ashley said that Jynsen loves riding his dirt bike and playing in the mud, she acknowledges her son has a soft side — and that's a good thing.

"There is nothing wrong with him playing with a doll, and one day he will make a very caring and nurturing person — and maybe one day a dad if that is what he chooses to become, but I will leave that up to him," she said. "It was important for me to share it from my own perspective to show others that it's OK to play with different types of toys. Toys do not have genders. Girls should be allowed to play with trucks and get muddy, while boys should be allowed to play with kitchen sets and dolls, if they choose. I hate that a lot of people have standards on what is the 'normal.' Playing with a doll will only make my son more caring and affectionate."

Now that Jynsen's dad has returned from deployment, Three has gotten a little less attention. However, he'll be able to cherish these sweet photos forever. Keep reading to get a look at this meaningful photo series.

Related:
This Mom Took Photos of Her Athletic Daughter to Prove That Girls Can "Do It All"
Previous Next Start Slideshow
Little KidsPhotographyParenting

Ciara
Ciara's Bedtime Routine With 3 Kids Is Adorably Chaotic: "We're Going to Have to Tag Team"
by Yerin Kim 4 days ago

The Ellen DeGeneres Show
Ricky Martin's Daughter Is Obsessed With CoComelon, but It's All Downhill When He Sings
by Perri Konecky 6 days ago

Little Kids
10 Online Parenting Classes That'll Help Every Parent, No Matter What Age Your Kid Is
by Sydni Ellis 1 week ago

Little Kids
Your Kids Can Pop Bubbles to Their Hearts' Content With This Fidget Toy From TikTok!
by Sydni Ellis 1 week ago

Babies
If Your Baby Shakes Their Head, Fear Not! It's Likely Just a Self-Soothing Technique
by Sydni Ellis 1 week ago