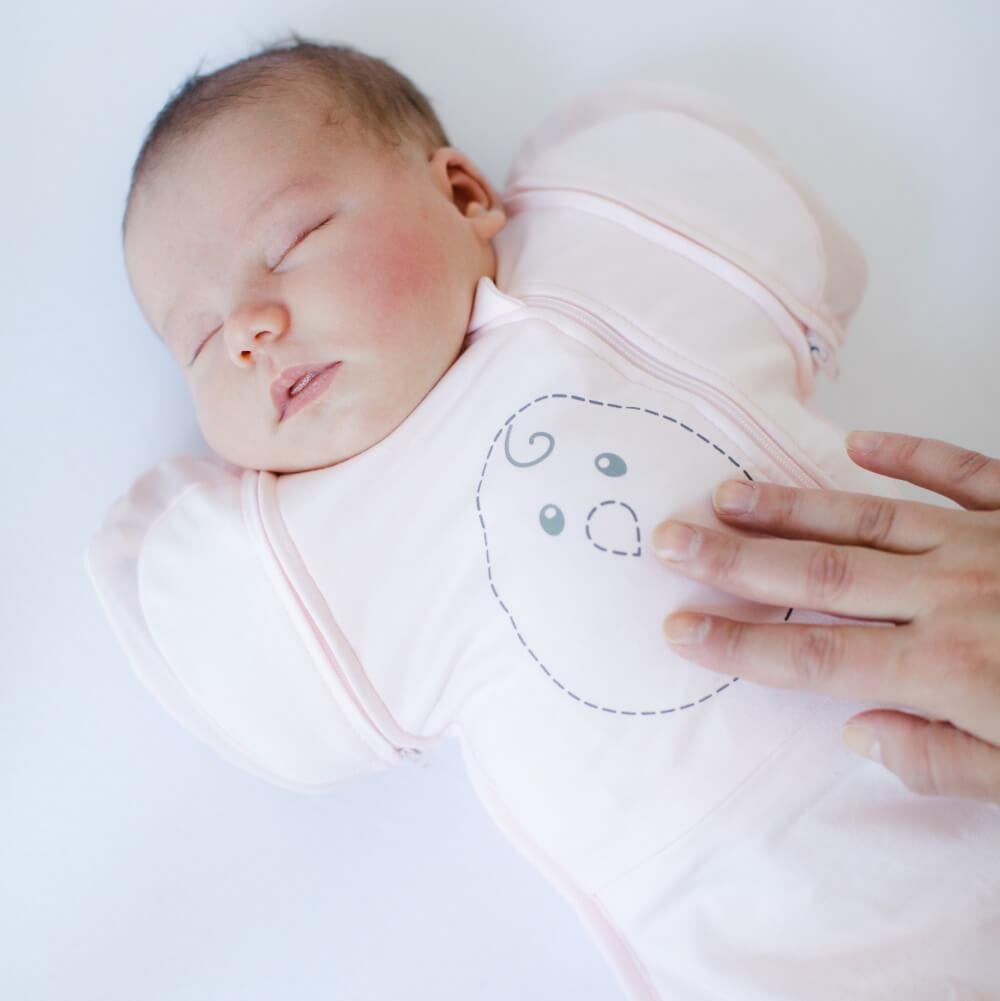 Recovering from a C-section with a squirrelly, sensitive, and sometimes needy 6-year-old and a newborn at home wasn't easy. Sleep was a must and all of the swaddle blankets we had been gifted for our newest addition to the family were like a sick joke. Despite all of the research I did on sleep sacks, swaddles, and wrapping techniques, nothing really helped once we finished rocking our newborn and placed her in her bassinet. Those first few weeks flew by in a blur of runny yellow dirty diapers, three different kinds of formula, the struggle of trimming a newborn's fingernails, and YouTube videos on how to comfort a fussy baby before bed.

I stumbled upon an ad for the Nested Bean Zen One Classic Swaddle ($45) during one of many late night feedings where my only solace was my phone and its window to the outside world. The website for the Nested Bean credits the slightly weighted chest and versatility of arm placement as reasons it has worked for tons of other parents who struggled to get their babies comforted and comfortable for bed. And when I thought about it, it seemed not unlike the science behind weighted blankets that adults are fond of. At that point, I was willing to try any swaddle. Despite the lack of fun prints and designs (which may or may not have been part of the reason I chose other swaddles), I ordered a Nested Bean. I was even tempted to pay an expedient amount for next day shipping. Like I said, it was a dark time.

A few days later, the swaddle arrived, and I was more excited for bedtime than I usually am. To be clear, that means a whole lot, because bedtime means a (mostly) quiet house except for the low sound of Friends in the background as we all try to fall asleep.

Related:
All of the Top Baby Gear and Products That Will Make Your Life Easier in 2020

From the first night, I noticed a difference in my baby's sleep patterns. The Nested Bean swaddle comes in two sizes (for 0-3M and 3-6M) and three colors (night sky, soft pink, and sand), all with a built-in wrap that secures around your baby's abdomen. You can choose to keep their arms secure and snug inside before you zip it up or open the arm holes to allow your baby's arms to stay out while they sleep. It also has a double zipper so you can open the swaddle from the top or the bottom. It's basically a dream as far as versatility goes.

My daughter's biggest issue was her startle reflex, which had continuously woken her up with other swaddle blankets. But even if her arms were kept out with the Nested Bean, she stayed calm and fell asleep a lot sooner than she had before we tried it out. I had noticed that resting my hand gently on her chest after I put her in her bassinet kept her calm. The weighted part on the front of the Nested Bean helped mimic this and have my daughter a sense of security right away.

Even on those nights when she would wake herself up by losing her pacifier and I would have to feel around in the dark to put it back in, my baby was less irritable when in the Nested Bean swaddle. It didn't solve all of our newborn-related bugaboos, though. If Nested Bean could come up with a way to change soiled diapers at 3 a.m., à la a Dr. Seuss contraption, then we'd really be in business. But when my newborn needed a sleep solution that went beyond your typical swaddle blankets and calming lotions, the Nested Bean swaddle basically saved the day. And my sanity. Keep reading to shop the Nested Bean swaddle!

Personal Essay
Amid Everything Happening in the World, I'm Really Grateful For Having Phone Calls Again
by Hedy Phillips 1 day ago

Steph Curry
See Steph Curry's Baby "Work Out" in Their Home Gym: "Questionable Form but We Will Take It"
by Chanel Vargas 2 days ago

Netflix
Netflix's Feel Good Is the First Show That Has Made Me Feel Really, Truly Seen
by Laur Freymiller 1 day ago

Personal Essay
How Do We Dress Comfortably When Nobody's Really Comfortable?
by India Yaffe 2 days ago