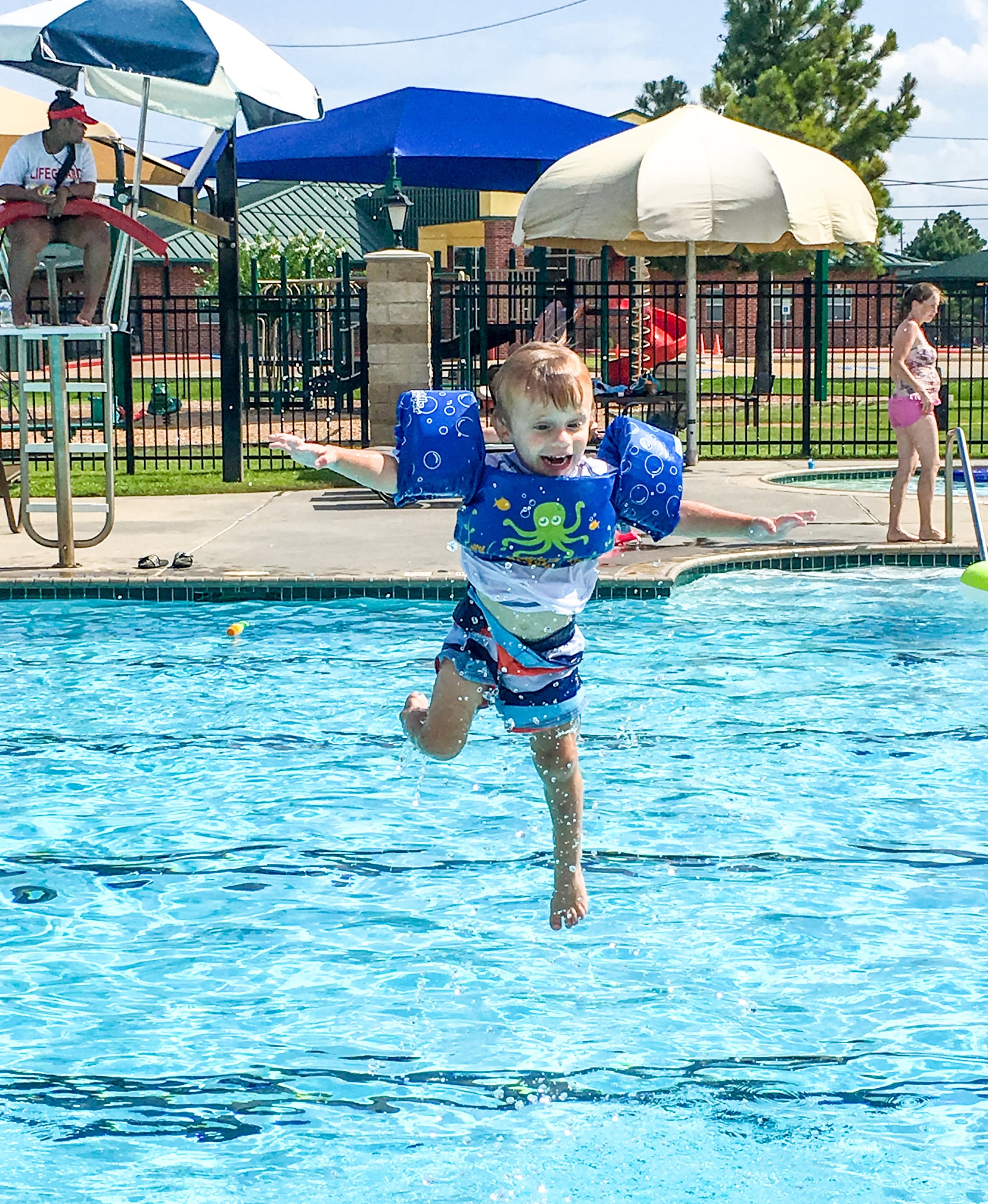 When we first began taking our toddler to the pool, I noticed that almost as ubiquitous as moms slathering pasty white sunscreen on squirmy kids was the presence of "puddle jumpers," a combination of a life vest and arm floaties. I saw toddlers and preschoolers alike wearing these brightly colored vests, buckled behind the back, as they bobbed and played in the water. I was new to child water safety at this point, and I looked at them with delight — a much better option than those useless blowup water-wing sets that served no real purpose in keeping anyone above water. I bought one the next day, and there hasn't been a trip to the beach, community pool, or water park without it, ready to be strapped around my child's chest.

It's certainly served us well through the years and up until this very summer. All the while, though, I'd hear musings about the concerns over floatation devices in general — namely that they offer a false sense of security. I certainly understood that risk, but I never realized that not all "Coast Guard-approved" personal floatation devices are created equal — and that the enormously popular puddle jumpers are more dangerous than readily available alternatives, like standard-issue life jackets.

In fact, Christi Brown, a mother who lost her 3-year-old son, Judah, in a drowning accident, considers the puddle jumper to be a major factor in his death — and possibly a factor in any number of the accidental drownings that are the leading cause of death in 1- to 4-year-olds, more than any age group.

Although it was certainly true for the Brown family that the puddle jumper provided a false sense of security — in which parents mistakenly trust their child is safe from drowning and children mistakenly think they can truly swim or stay afloat without them — it is not the only reason she and water-safety experts agree that puddle jumpers pose additional risks to children.

Related:
Experts Agree That Swimming Is Safe During COVID-19, but You'll Need to Take Precautions

Dr. Helen Binkley — a health professor who has more than 30 years of experience in aquatic safety, particularly with lifeguard and swim instruction — told POPSUGAR that she does not recommend puddle jumpers, period.

"The device does not allow the child to get into an appropriate position for swimming," she said, noting that kids who wear them either spin their arms in a bicycle motion, which expends large amounts of energy, or neglect to use their arms at all. "It keeps them vertical, with arms out horizontally."

Lindsay Mondick, an aquatics expert and swim instructor with YMCA of the USA, agreed that this style of floatation device isn't as safe as traditional life jackets because it puts children "in a vertical position," which is, in essence, a drowning position compared to turning horizontally, face-up. "It's not necessarily made to flip somebody onto their back," Mondick told POPSUGAR. "That's not the goal of this design."

Upon closer inspection of the fine print on my child's brand of puddle jumper, it confirms that "this device is not designed to turn an unconscious wearer face-up in the water . . . its design provides a stable position in calm water for persons floating with their head tilted back."

Related:
An Epidemiologist on the 2 Things She's "Watching Very Closely" Before Sending Her Kids to School

And for Brown, whose son died after entering the pool shortly after his puddle jumper was removed, she is convinced this is what made his drowning happen faster. "Puddle jumpers teach children muscle memory for that position, so that when they get in water, they will automatically go vertical, whether they have the device on or not," she said.

For all the disadvantages to the puddle jumper style of swim aid, it's a wonder they are so commonly used — especially when a safer option is available for purchase in the same stores and at roughly the same price point.

That option is a typical, US Coast Guard-certified life jacket, which is made of thick foam, is more buoyant, and, Mondick said, has a collar to keep kids' heads up in the event of an incident in the water, whether they retain or lose consciousness. These children's life jackets also tend to include a crotch strap to keep them from riding up.

"Most of those infant and toddler life jackets with that collar and strap are what you're looking for, because that does help get them on their back," she said. As for nonswimmers past toddlerhood, "youth sizes have that extra buoyancy on the chest that do the same action."

So, why are puddle jumpers still the floatation device of choice at every pool and water park I've been to for the past five years? Brown believes it's certainly a mix of word-of-mouth marketing and organic exposure — the very method to which I came to own one — and a slew of positive, parent-approved reviews.

"Puddle jumpers are one of the more comfortable and lightweight options with minimal restrictions for a lot of activities, and they're easy to wear for extended periods of time," Mondick said. "And that's why parents opt for them."

In fact, Mondick, who has an 8-year-old daughter, recalled that when she was little and they were walking through the store, she discovered this allure. "We went to pick out a life jacket, and the puddle jumpers have these really cute logos and decals, and they're bright, vibrant colors vs. the life jacket that I wanted," she recalled. "So guess which one she is going to want."

But perhaps the most confusing reason parents confidently purchase a puddle jumper is its top selling point, that it is a "US Coast Guard-approved floatation device." It sounds legitimate, but Binkley noted that although the Coast Guard does approve them as floatation devices, "they may be marketed as 'swim aids' but are not at the more rugged standards of other types of life-saving devices that are approved to prevent drowning."

As it turns out, the Coast Guard classifies life jackets into five different types, and only types I, II, and III are approved for children to use. Mondick's recommended model of life jacket falls under Type III. Puddle jumpers, however? Those are Type V, meaning "special use." It's the lowest level, behind even basic ring buoys, and it's, once again, because they aren't designed to turn an unconscious person face-up.

"You have to remember that, even though it's Coast Guard-approved, not all Coast Guard-approved devices perform the same way," Mondick said. "Because puddle jumpers are Coast Guard-approved, parents don't realize that some will flip you upside right and some will not or that they should look at the level of buoyancy to see what is the safest application for their child. It's really important for parents to check the label and be sure the life jacket that they're selecting is appropriate." 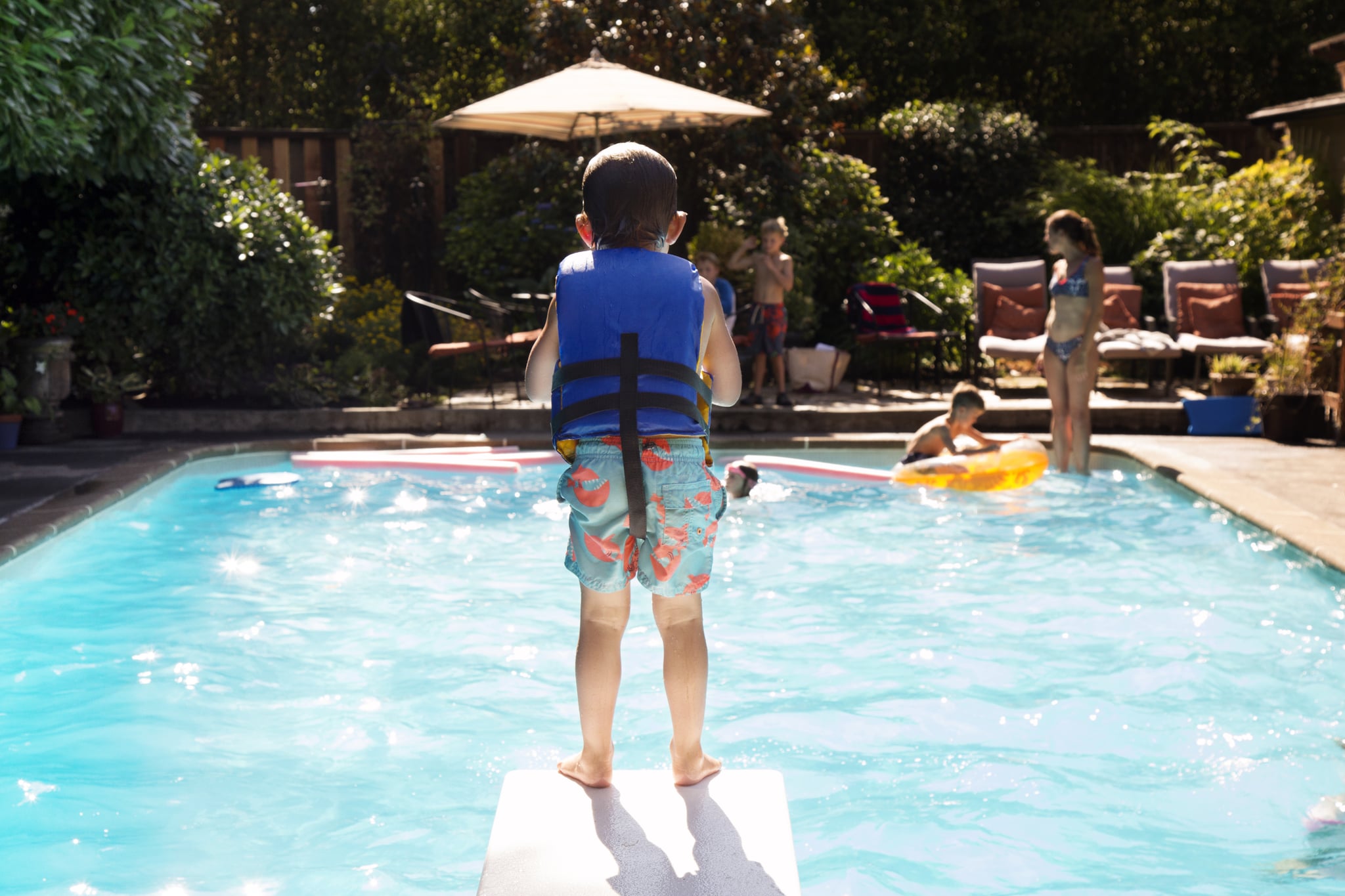 The Case For Not Using Floatation Devices at All

Would these safety experts ever place a child in a puddle jumper?

"It depends on what I'm doing," Mondick said, noting that she has not used one with her child. "If we were going into the water and I was to be actively supervising within arms distance, a puddle jumper might be applicable, but if I'm going to get out of the water and let her play with a little bit more freedom while I'm actively supervising, maybe from the beach or the side of the pool, a better option is going to be safer. And that is because I just want to know that if she were to get in trouble, that it would flip around to her back so that she is safe and can breathe."

I can attest, anecdotally, that it's rare to find a family who brings along a puddle jumper for those times in which parents are employing active "touch supervision" as well as a separate life jacket for those moments the caregiver steps away or switches focus to another child. Mondick agreed.

"You have to think back to the scope or the purpose of the equipment that you're choosing as a parent to make sure it's providing that safest layer of protection," she emphasized. "And for those who are 5 years and younger who can't swim, who are not protected by touch supervision, the safest life jacket for them is one that is Coast Guard-approved with both the collar and strap between their legs."

"To be honest, I believe all personal or play floatation devices on children are inherently dangerous, especially if the child is not taking swimming lessons to learn appropriate techniques."

"To be honest, I believe all personal or play floatation devices on children are inherently dangerous, especially if the child is not taking swimming lessons to learn appropriate techniques," she said. "I have always explained to the parent, 'If you do not plan to be in the water with the child by your side, then do not use a flotation device.' Parents think or believe, with false confidence, that if they put a flotation device on the child, that the child is good to go, or they don't have to watch them as closely and can socialize with their friends, or the child can be by themselves in the water because they are safe. That is not true."

Of course, Binkley acknowledged that floatation devices and life jackets — but never puddle jumpers — should absolutely be used for open-water activities, such as boating, tubing, and paddle boarding. It's also true that life jackets save lives — that even good swimmers can drown. Her concern, though, is the overarching belief that floatie use during basic swim play is detrimental to child safety and their ability to learn to swim.

To that end, Mondick agrees. Although her swim instruction occasionally utilizes floatation devices to teach certain skills, she sees water safety as a layered approach of many precautions in play at once.

"Prevention is achieved through layering of protective measures, life jackets being one of those, along with why people shouldn't use puddle jumpers," she said. "But learning to swim with certified lessons, supervised access, and designating a water watcher are more of those layers of protection that go into being safer around water."

For her part, Brown advocates for survival swim instruction for children ages 1 to 4 years old vs. traditional swimming lessons that young kids often don't have the developmental strength or coordination to benefit from yet. She agrees with Binkley that any floatation device, unnecessarily used, can increase a child's risk of water-related injury or death. And she shared Mondick's same sentiment about protective layers.

"Not many know that puddle jumpers give kids a false sense of security . . . and makes them brave and unafraid to walk into the water without it on," she said. "Most people don't know that it takes multiple layers of protection to truly keep a child safer around water because if one layer fails, you need the rest to hold strong."

Although puddle jumpers may seem like a mighty popular, mom-approved protective layer that I for one relied upon for years, it's a layer that — unlike any of the others — fails from the start.

Family Travel
You May Want to Rethink Thanksgiving Travel, According to the CDC's List of Guidelines
by Murphy Moroney 2 days ago

PEN15
PEN15 Season 2 Remains Raunchy as Ever, but It Has Thoughtful Messages For Tweens and Teens
by Stacey Nguyen 6 days ago