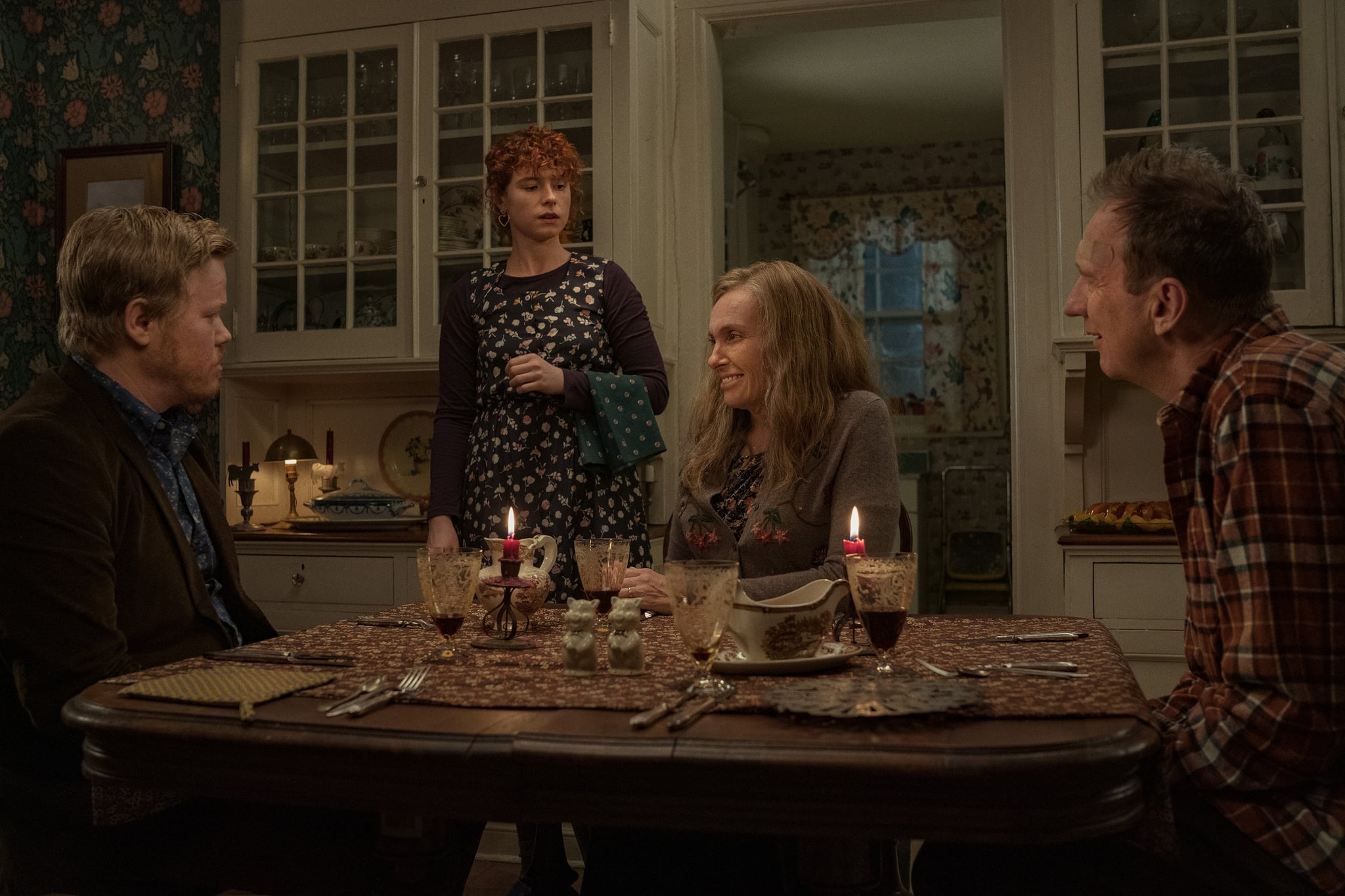 Charlie Kaufman's film adaptation of Ian Reid's unsettling debut novel, I'm Thinking of Ending Things, premieres on Netflix on Sept. 4. While the movie adaptation, starring Jessie Buckley, Toni Collette, and Jesse Plemons, may differ from the novel, the novel is about an unnamed woman who goes to meet her boyfriend's parents at their farm. Many weird events ensue, in which "Girlfriend" continues to consider ending things. The novel ends with a dramatic plot twist you might be wondering about after watching the trailer. If you don't mind spoilers, you've come to the right place. Here's how it plays all out.

The Characters and Plot

Once Jake and Girlfriend meet at a college trivia night, he slips his number on a piece of paper in her purse. They don't date for long before Jake takes Girlfriend to meet his parents at their farm. Girlfriend feels like she's known Jake for longer than she has, and despite their growing closer, Girlfriend thinks of ending things often. These thoughts make her feel guilty about going to meet Jake's parents, but she goes anyway. She doesn't plan to tell her parents about Jake, but she doesn't tell him that. Instead, on the way to the farm, the two talk about big words like "cruciverbalist," which means a person who's talented with crossword puzzles, and whether people can be truly funny.

Girlfriend thinks about "The Caller," a person who continues to call her with the same message: "There's only one question to resolve. I'm scared. I feel a little crazy. I'm not lucid. The assumptions are right. I can feel my fear growing. Now is the time for the answer. Just one question. One question to answer." She doesn't know who the caller is or what they're talking about, other than the caller sounds like a man trying to speak like a woman with a high-pitched tone. She doesn't tell anyone about The Caller, even though she feels scared.

From the moment Girlfriend meets Jake's parents, she can tell something's off. His parents make weird remarks and she's confused by a lot of what she sees. For example, she sees a picture of a person she thinks is her younger self, but Jake says it's him.

The peculiarities don't end at the farm: On the way home, Jake and Girlfriend stop at a Dairy Queen, in which Girlfriend recognizes the cashier but can't figure out how she knows her. After finishing their treats, Jake decides they'll throw the cups away at a high school. Once they're back in the car together, they kiss. After a few moments, Jake believes a janitor has been watching them.

Filled with anger, Jake follows the janitor into the school building. After waiting in the cold car for a while, feeling worried, Girlfriend decides to check on Jake. She quickly gets lost — but then remembers where the gym is, despite having never been to this school — and goes there.

Upon entering the school, the first plot twist occurs: Girlfriend realizes, mostly from the picture of Jake she thought was her, that she and Jake are the same person. Jake then becomes the narrator of the novel. Despite this realization that only one of them is at the school at that moment, both Jake and Girlfriend sit in a closet together, and Jake recounts wishing he'd given Girlfriend his number in the pub rather than letting fear get the best of him. The reader can assume The Caller was Jake playing out this fantasy of dating Girlfriend and trying to figure out if that life was possible for him.

Then the second plot twist occurs: This story the novel portrays is really what Jake wrote in his novel, in which he pretends he gave Girlfriend his number. He wished they'd gotten together so badly that he made it real through writing about it.

The janitor then opens the closet door and hands Girlfriend a hanger. "I'm thinking of ending things," she says, and stabs herself. Jake realizes once again just how alone he is. Even though Girlfriend stabs herself, since she's not really there, it's Jake who dies by suicide.

In between these chapters are dialogues in italics spoken by unknown characters about an awful event that occurred at the school. Toward the end of the novel, we learn Jake was a janitor 30 years ago, and his parents died many years ago as well. People at the school noticed he wrote in his notebook a lot, but they didn't realize what was truly going on until they found the notebook by Jake's body.

If you or a loved one are experiencing suicidal ideation or are at risk, the National Suicide Prevention Lifeline has several resources and a 24/7 lifeline at 1-800-273-8255 or you can text the Crisis Text Line at 741-741.