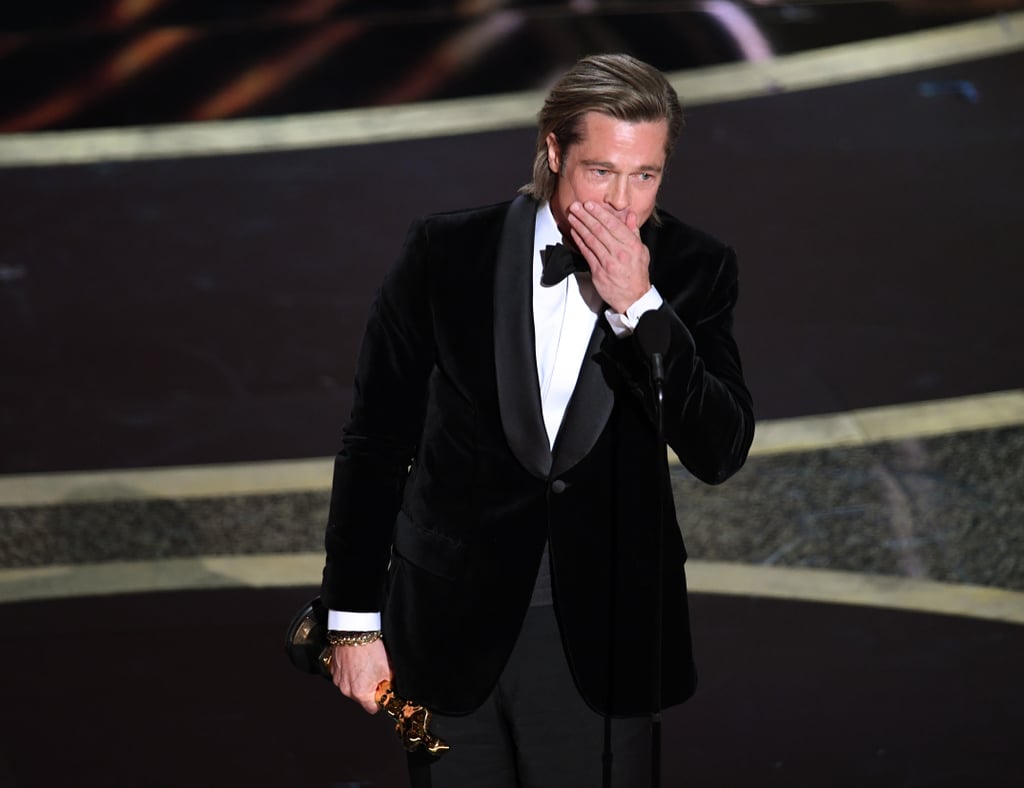 Brad Pitt appeared visibly moved as he accepted his first acting Oscar. The actor, who previously won for producing 12 Years a Slave in 2013, was honored in the best supporting actor category for his portrayal of stunt double Cliff Booth in Once Upon a Time in Hollywood. After thanking the Academy for the "honor of honors," Pitt praised the film's director, Quentin Tarantino, and his costar, Leonardo DiCaprio. "Leo, I'll ride on your coattails any day, man," he said. "The view is fantastic."

"The view is fantastic."

Pitt then proceeded to reflect on going to the movies with his parents as a child, as well as all the "wonderful people" he's met throughout his prolific career. He sweetly added, "Once upon a time in Hollywood — ain't that the truth?" Pitt ended his speech with a heartwarming mention of his six children. "This is for my kids, who color everything I do," he said. "I adore you."

Pitt had previously been nominated five times. In addition to the aforementioned 12 Years a Slave win, Pitt was recognized as a producer of best picture nominee The Big Short in 2016, as well as in the best actor category for Moneyball in 2012 and The Curious Case of Benjamin Button in 2009. His first nomination was for best supporting actor for 12 Monkeys in 1996.

Following the win, Pitt spoke with reporters backstage about his acceptance speech strategy: "Historically I've always been really tentative about speeches. They make me nervous. So, this round I figured if we're gonna do this, I'd put some real work into it and try to get comfortable." When asked if he had received any outside help for the many charismatic speeches he's given this award season, Pitt said, "I definitely write them. I have some funny friends. I have some very, very funny friends who help me with some laughs, but no, it's gotta come from the heart."

Watch the long-awaited award-show moment ahead.