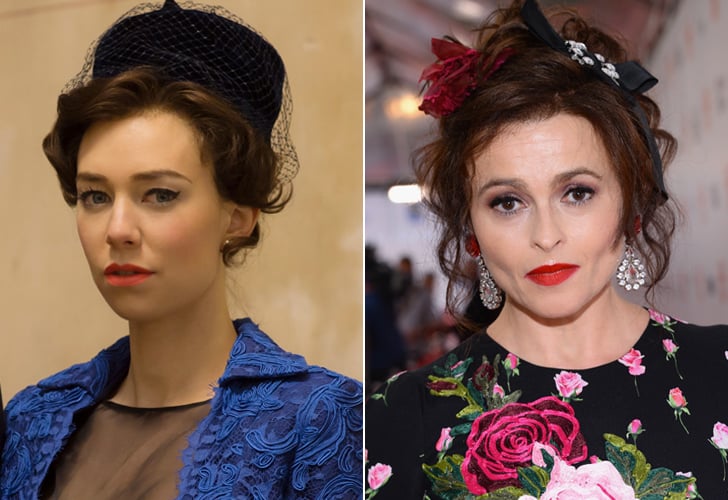 Season two of The Crown might have hinged around high-profile moments in Queen Elizabeth II's life, like her dinner with JFK or her trip to Ghana, but it's her younger sister, Princess Margaret, who steals the show. Thanks to Vanessa Kirby's exceptional performance, the fashionable, rebellious princess ends up being the second season's most relatable (and entertaining) character. Fortunately, it looks like Netflix has found the perfect actress to replace her in seasons three and four, since there will be a bit of a time jump.

Ocean's 8's Helena Bonham Carter is in talks to take over for Kirby. Netflix has yet to officially confirm the news, but it seems like a done deal thanks to Kirby's latest Instagram photo. The two actresses happily posed for the camera, and Kirby even captioned the cute shot, "Honoured @thecrownnetflix." Seeing them next to each other only further proves how great the casting of Carter would really be.

The versatile 51-year-old actress has appeared in everything from Fight Club to Alice in Wonderland and the Harry Potter franchise, and she has more than enough spunk to play the iconic royal. Concrete details for season three are relatively scarce at this point, but we'll likely see the dissolution of Margaret's marriage to Tony Armstrong-Jones and more ups and downs in her tense relationship with the queen. If anyone can handle applying Princess Margaret's eyeliner and swanning around the palace with thinly rolled cigarettes, it's her.

Claire Foy, who's picked up a few awards for her performance as the long-reigning monarch, is also being recast. British actress Olivia Colman is stepping into her sensible heels and will no doubt be a great sparring partner for Carter on screen. There's still no word on who will play the older versions of other key characters, but might we suggest Colman's Broadchurch costar David Tennant as Prince Philip? Maybe Netflix can consult with The Crown's number one fan, the real Queen Elizabeth, for other suggestions.