This trailer is not a joke. Or at least, I don't think it is. Perhaps it's the voice-over, Nicolas Cage's cheesy lines ("Hell already is walking the earth"), or the onslaught of explosions, but it's hard to decipher if Drive Angry 3D is going for camp or taking itself seriously. In my mind, I'm already putting it in the same category as Snakes on the Plane. It seems similarly laughable, and the 3D effects will only add to the absurdity. 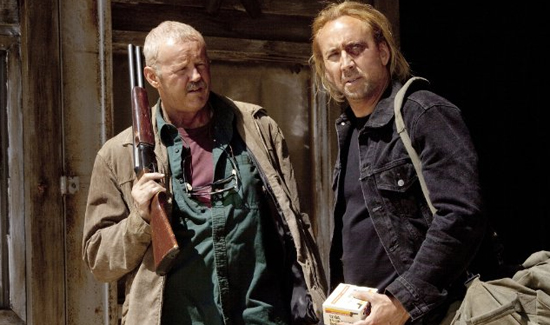 Cage stars as Milton (quite the nerdy name for someone who's supposed to be badass), a father who's out for revenge on the men who took his baby daughter. William Fichtner (Prison Break) costars as his nemesis, a henchman for the devil and Amber Heard fills the role of requisite hot-bodied female in short-shorts. Oh, and the leader of the cult? No, your eyes aren't deceiving you: it's Billy Burke, AKA Bella Swan's father. Look for him in the trailer when you read more.

Halloween
In Case You Were Curious, Here's What the Halloweentown Cast Has Been Up to Since 1998
by Monica Sisavat 12 hours ago