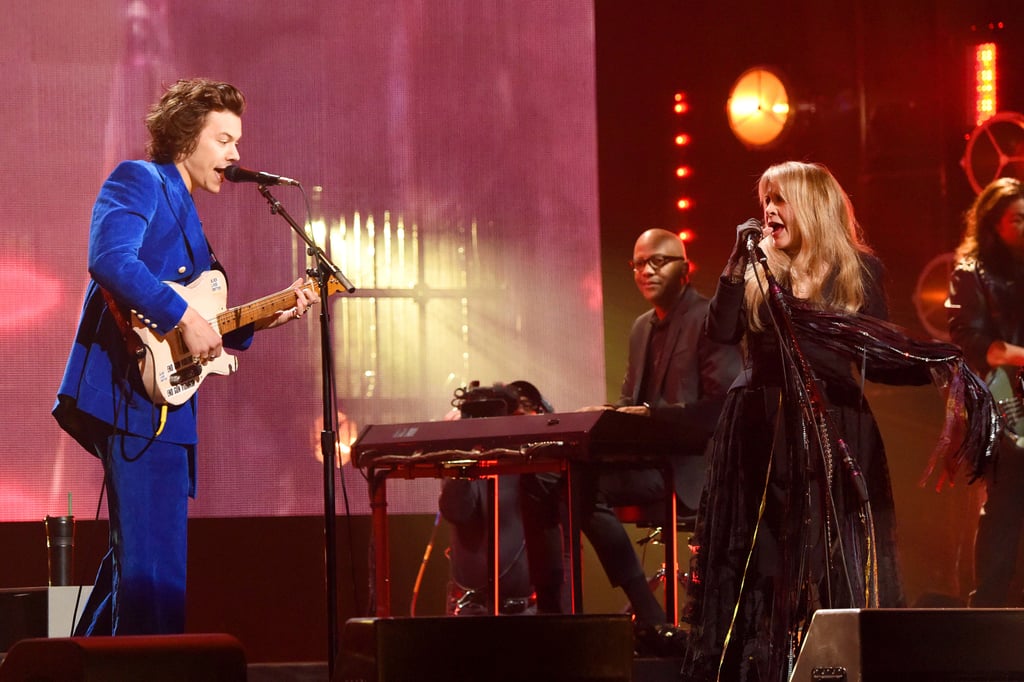 Stevie Nicks and Harry Styles honored the late Tom Petty during the Rock & Roll Hall of Fame induction ceremony on Friday. At the NYC event, Nicks and Styles took the stage to sing "Stop Draggin' My Heart Around" — the first single from Nicks's 1981 debut solo album Bella Donna. Petty cowrote the tune and also sang with Nicks on the track. Sadly, the legendary singer died Oct. 2, 2017 due to an accidental overdose. He was 66 years old.

The Rock Hall tweeted a video of Nicks and Styles performing the special song, adding, "This one's for Tom." In the clip, Nicks passionately croons while Styles strums a guitar before joining in on the singing. That same night, Styles introduced Nicks as one of the inductees with a heartwarming address in which he praised her for "creating stories that flowed from her heart to her pen, which ended up in our souls, with characters we'd always remember." Although Nicks accidentally mistook Styles for a member of *NSYNC — which is now a big internet joke — the two had wonderful chemistry on stage and even posed with each other for pictures after the show.

Nicks's induction is a historical occasion, as she is the only woman to be included in the Rock & Roll Hall of Fame twice. The first time came in 1998 when she was inaugurated along with Fleetwood Mac as the band's lead vocalist. Now, the 70-year-old Grammy-winning rock icon gets yet another moment of recognition from the Rock Hall. Ahead, watch her heartfelt performance with Styles and more photos from their tribute!

Coachella
Missing Music Festivals? These 15 Are Happening in 2022
by Divya Meena 3 days ago