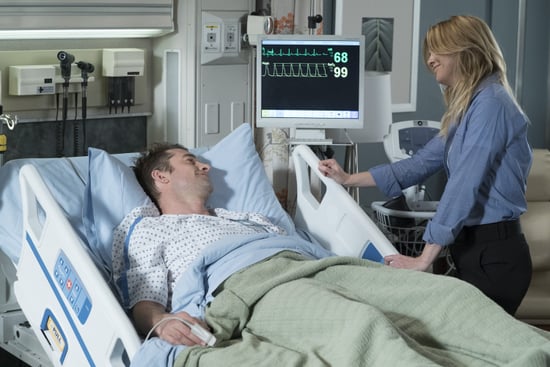 Nearing the end of Grey's Anatomy's 14th season, Scott Speedman swooped in and caught us by surprise by playing a charismatic transplant surgeon named Dr. Nick Marsh. After performing surgery, Dr. Marsh collapses, only to have Meredith be his knightess in shining armor and rescue him. After Dr. Marsh stabilizes, he and Meredith hit it off, and she later saves his life being the goddess of a surgeon that she is. And they lived happily ever, right? Well, we don't know. All we know is that he probably went back to Minnesota to work at the Mayo Clinic. Here's everything that we know about Meredith's current love situation and Speedman's obligations to other roles.

In terms of her plot on Grey's, Meredith hasn't had much luck in the dating field after Derek. Sure, Will Thorpe and Nathan Riggs were interesting in their broody, prickly ways, but Dr. Marsh oozed with charm around Meredith, even in a bed-ridden state. In their first moments together, they chatted endlessly about medicine, their backup life plans, kids, and everything else! And we felt the chemistry. There's something so kind and disarming about him that brings out a sweetness in Meredith, a tenderness that we've rarely seen since the first few seasons of Grey's. Meredith felt the chemistry, too, as she later confided to Alex.

ABC has been fairly secretive about the duration of Speedman's appearance on Grey's. If we're lucky, he might have an arc on Grey's like his fellow Felicity costar Scott Foley, who played Teddy's late husband Henry (please don't kill him off). If we're really lucky, Speedman might hitch onto a recurring role and then become part of the show's recurring cast. But as of now, it looks like he may just be an emotional revelation for Meredith, who's thrown all of her post-Derek energy into being a badass surgeon and mother. She's at least now ready to get back into the dating pool after Riggs waltzed away with Megan to Los Angeles. I mean, she even told Alex she hasn't felt this way since Derek.

So can Dr. Marsh hypothetically come back to Grey's? Speedman currently holds a series regular role on the TNT show Animal Kingdom. He plays Baz, the adopted son of the show's protagonist, Smurf Cody. Baz is last seen fighting for his life in the season three trailer of Animal Kingdom. Since he's a main character, his death would mean major changes for the show's trajectory. So it's reasonable that Grey's producers, as a professional courtesy, don't want to spoil too much for Animal Kingdom fans. If Baz dies or decides to move away, it's a very likely sign that Speedman will be joining our beloved medical drama in a more permanent way. We know we're being a little selfish, but we're too excited to see Meredith to finally have a functional romance in her life once more.

TV
If You Love Ted Lasso Like Dani Rojas Loves Football, Try Out These 14 TV Shows Next
by Amanda Prahl 2 days ago