Pete Campbell is one of Mad Men's most divisive characters, as he's schemed and smarmed his way through four seasons at Sterling Cooper Draper Pryce. Ahead of the series' return this Sunday, we got a chance to chat with Vincent Kartheiser, the man behind Pete Campbell's suit and smirk. Check out what he had to say about Pete's evolution, his favorite costars to work with, and why being drunk on the set is a bad idea. 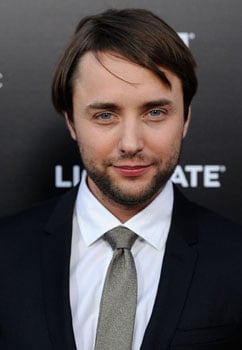 Do you have any rituals you do to warm up before filming?
Vincent Kartheiser: I used to jump around, scream and curse, and do all kinds of vocal exercises, but I don't really do that anymore. About halfway through last season, I found that none of that helped. I still do it once in a while, just out of habit. I've kind of killed most of my rituals.

Are you interested in a picking up a new ritual? Like shotgunning a beer?
VK: [Laughs] Yeah, no. There's no shotgunning of any beers on the Mad Men set. Contrary to popular belief, acting drunk while being drunk actually doesn't work that well.

Where do you hope Pete ends up at the end of the series?
VK: In the first season, I had all sorts of hopes, and I would sit and project, "Maybe it will be this," or, "Maybe they will send my character here," and a couple of times, I would talk to my friends about it. But I found that all the places that Matthew [Weiner] had brought Pete Campbell were completely unexpected by me. And were actually way more interesting and way more fun to play than any of those things that I had been thinking of. So I stopped having any expectations for my characters.

After such a long hiatus, is there fear among the cast that audiences have gotten over the Mad Men craze?
VK: I don't have fear about that because I know that we have a specific product that is not easily replaced, because it's not a genre; it's not a niche; it's a real story. It's not like we're doing a cop show, and there's a new cop show that everyone's into. It's not like we're even doing an advertising show. We're part of a show that is a specific story, and people have become interested in and intrigued with these characters, not necessarily with the genre or not necessarily with some type of gimmick. It's a story that I think people want to know the end of, and I think we have a group of fans that also aren't your usual television watchers. So it's a group of people that haven't refilled their DVR schedule with whatever is hottest this year, but rather it's people who have sought out our show in particular. We do believe that they will come back, and I also think that they will be rewarded for that, because when Matthew Weiner is given even a few more weeks to write something, it just gets better. And in this case he's been given a few more months. It's a great season. The scripts this year are intense and suspenseful and funny, and it's been a real joy to read and to perform this season, and I just know that the audience is going to be more excited than ever.

To see what Kartheiser had to say about Pete's fatherhood and more, just read more.

What do you think about the path that your character has taken over the course of the last four seasons? Has fatherhood changed him?
VK: Well, I think fatherhood has changed him, in the sense that it has brought this level of expectation and pressure to his household for him to be even more ambitious than he was before. Which must be quite an accomplishment for someone like Pete, who has been willing to blackmail his way into success. I love where the character's gone. It's such an interesting time, 26- to 30-years-old, and I think that time in a man's life, you either succeed or find out that you never will really be the man that you wanted to be. Late 20s, early 30s is when you kind of have to stick your flag in the ground. There was a while there when it was up in the air whether Pete was going to get the opportunity to do that or not. He didn't really feel like he fit the job of account manager very well. He thought, incorrectly, that he should be in Don Draper's shoes, making creative choices. Somewhere in season three, he kind of slid nicely into his character, and I think that has to do with his profession, and I think that has a lot to do with his wife, who has kind of made him buckle down and made him see what he has to do and believed in him and supported him. And I think the same comes with this child. It's forced him to kind of man up and say, "OK, this is the path that I'm on. I'm doing OK here. Instead of trying to be all these other things, I'm gonna be the best damn account man I can be." So in those ways, he's found a way to make a name for himself at Sterling Cooper Draper Pryce, and he's become a partner, and he has a lot of responsibility at that firm. So it's been a great evolution. And it's been interesting because myself, Vincent Kartheiser, as an actor, I was also trying to find a role that would help me stick my own flag in the ground, and Pete Campbell has done that for me. So there's a bit of synchronicity between the two.

How are you and Pete similar and how are you different?
VK: I'm similar to Pete because we both can be immature and petulant, and we can act out of fear. But I'm also similar to him because I think me and him are both generally sure that we are doing the correct thing. Even though Pete sometimes is not doing the right thing, he thinks it is the right thing, and he thinks it is, sometimes, the only option. And I think I can have similar feelings. When it comes to being different, we have very different backgrounds and very different relationships with our family and very different outlooks on the priorities in our life. Pete is much more ambitious than I am and much more cutthroat than I am. I think he can be way more competitive than me as well.

What have been some of your favorite moments to shoot in the last few seasons?
VK: I love all the scenes I have with Elisabeth Moss. She's such a fantastic actress, and I just love all the stuff we've had together. I love all the stuff that John Slattery has directed me in. He's got such a great tone when speaking with me as an actor, and he's a real director at heart, and I think every actor should work with him as a director once in their life. He's phenomenal.

Halloween
Hello, Horror Movie Fans! Here's a Scary Netflix Streaming Schedule For All of October
by Kelsey Garcia 13 hours ago

HBO
The Vow: The Surprising Connection Between Catherine Oxenberg and the Royal Family
by Monica Sisavat 1 day ago

by Corinne Sullivan 17 hours ago