"Three hobbits, an elf, and a human walk into a bar . . . " is not only the start of a bad joke but also what happened when Viggo Mortensen, Orlando Bloom, Elijah Wood, Dominic Monaghan, and Billy Boyd got together for a glorious Lord of the Rings reunion on Monday night. Monaghan captioned the group shot on Instagram, "they have a cave troll. @theoneringnet @electrice @boydbilly @orlandobloom @empiremagazine #squadgoals," which appears to be a behind-the-scenes photo of a shoot for Empire magazine. The movies (adaptations of J.R.R. Tolkien's novels) were released back to back between 2001 and 2003, and the former costars have remained close friends since filming on the Peter Jackson-directed trilogy ended.

In December, Bloom celebrated the first film, The Lord of the Rings: The Fellowship of the Ring, turning 15 years old with an Instagram photo of him and Mortensen on set in a helicopter. We have to say we prefer Monaghan's, though, simply because the group's dedication to re-creating their roles of Merry (Monaghan), Frodo (Wood), Pippin (Boyd), Legolas (Bloom), and Aragorn (Mortensen) has us all kinds of nostalgic. Once Gandalf is done protesting, maybe he can join them. 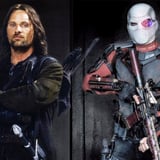 Blake Lively
Exclusive: Blake Lively Is a Master of Disguise and Destruction in This Intense Rhythm Section Clip
by Kelsie Gibson 10 hours ago

Selena Gomez
Surprise! Selena Gomez Got a New Tattoo to Celebrate the Release of Her Album
by Danielle Jackson 13 hours ago