Jason Schwartzman and Adam Scott's new film, The Overnight, is a relationship comedy about getting older, staying young, and the complications that arise given the fact that those two things don't exactly agree. Jason and Adam play husbands and dads who, after a chance meeting at the playground, have a dinner party with their wives, played by Judith Godrèche and Taylor Schilling, respectively. As the night goes on and the wine flows, things devolve (or evolve, depending on your perspective) to a point that has both couples questioning who they are and what they want. We caught up with Jason and Adam in LA to talk about the film, modern parenthood, and their full-frontal scenes. 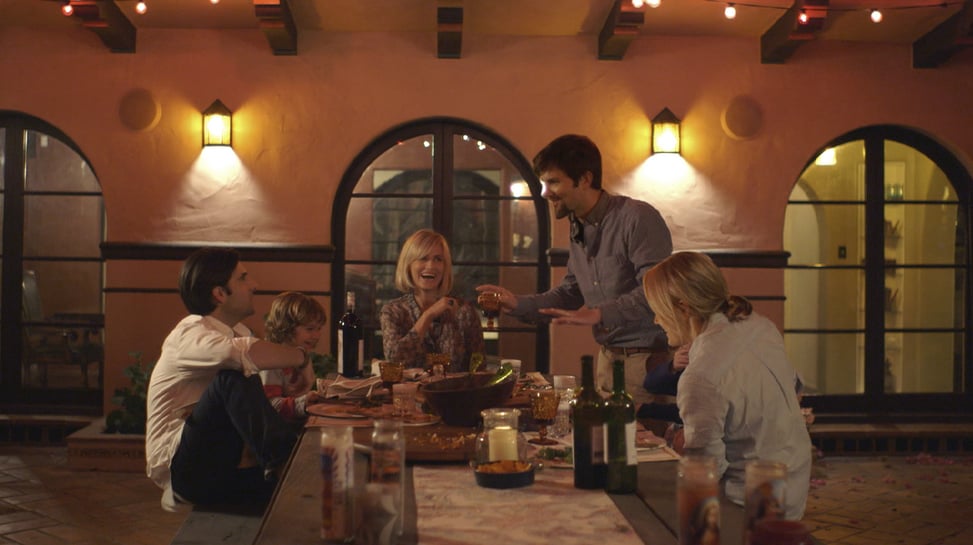 POPSUGAR: The movie explores the idea that it's tougher to forge new friendships as you get older — especially as couples, when there are four people in the mix. Do you guys find that to be true?

Jason Schwartzman: Yeah, it's hard. It was always hard for me to really make friends, but that's just because I like to stay home. I know a couple that's so social, it's amazing, and you're like, "God, they're great for each other cause they're out all the time."

AS: Like genuinely, my ideal night is eating, putting the kids down, and then just laying under a pile of blankets and watching TV.

JS: I also have a thing that I always say to my friends: "But it's no pressure!" I really don't mind if people cancel. I would be excited to hang out with them, but at the same time, there are people that really get upset about that. But if I had a plan tonight, it would weigh on me all day . . . because the thing that Adam was describing, that's like my reward for the end of the day. It's like the prize that I get is to get there and just sit. So it's like, depriving me of that prize.

AS: I know. Tonight we have this screening, and the whole time I'm going to be thinking about being in sweats, and looking on my iPad.

PS: Having kids yourself, do you think people sometimes forget a sense of FOMO about what you're trading off isn't unique to parenthood?

AS: Yeah. I guess you get to a certain age, and you feel like you know who you are, and how you fit into the world, and how the world sort of perceives you. And you get pretty set in that. And then things can happen that can turn it upside. That's sort of what happens to all the characters in this movie, eventually.

JS: Being a parent is a big relationship, and you're a unit. You have responsibilities to grow together. But what's also easily forgotten is your responsibility to have adventures as an individual and bring them back to the relationship so it can move. I remember this documentary, River and Tides. It's about a nature artist who does beautiful landscape art, and a lot of his art he makes is destroyed that day, just because it's in nature. But I remember — I was in a relationship around that time — seeing it, thinking like, I'm not flowing. It resonated with me when I saw it that I felt so stagnant. You just have to make an effort. Your life is about your children, but you [have to] be curious and interested and fascinated with things yourself, so you can keep everything going. So you don't get dad bod, metaphorically.

AS: You don't want dad bod.

JS: You don't want that muscle to turn to fat. And I don't just mean the physical. I know it sounds like a joke, and I do love a bad metaphor, but there is something about that: muscle turning into fat. You have all these things you love, and if you don't work on them, it will just die.

PS: Do you think there are things that we confront differently, or more often, than our parents did in grown-up life?

AS: I think that we are a pretty evolved generation as far as gender roles go. I think we've got to a pretty healthy place, at least awareness-wise, of gender roles. With this generation of parents, I see a lot of dads being really emotionally involved with their kids in a way that certainly wasn't with the boomer generation when they were kids. It's very different now than it was 50 years ago, or 60 years ago, and I think it's kind of a mixture of a lot generational things that add up to the confusion that the characters feel. Whether it's penis size, or your responsibilities as father or a husband or a wife, we're supposed to be so evolved on our thinking on all of these things. But I think all these characters are getting tripped up on the same old questions.

PS: You guys must field tons of scripts with full-frontal nudity all the time, right? [Laughs]

PS: We do very rarely see male full-frontal nudity in films. So, of course, you guys have gotten asked about this a jillion times. What's the weirdest question someone has asked you about those scenes?

AS: Well, there's this kid earlier that interviewed us for a college newspaper who put the question pretty bluntly, which was: "Was that a fake c*ck?"

JS: This isn't as much a weird question, but when Adam and I are together — we've done Q&As — we bring up that it is a prosthetic. But Adam wasn't at this South by Southwest screening, and so I didn't naturally think to do it. So, we were doing this Q&A, and this woman in the front had this huge smile on her face, and was just like "I just wanna say I'm so happy to see some nudity and you looked great . . ."

JS: I felt odd. And I kept going, talking, answering, and there was a moment where I was like, "Do I tell her it's a fake penis or not?" Because she seemed to be so in love with this penis. I've never experienced a stranger loving my penis like that.

PS: So did you clear it up?

JS: Someone else brought it up. I felt bad for her, because it seemed like everyone else in the room knew but didn't want to say it.

AS: Did she crumble into a pile of ashes?

JS: She did. She gave the face that I was nervous [about]. Why I hesitated to tell her.

AS: Someone told her there was no Santa Claus.

PS: One of the other ideas in this movie is that struggle of, as you get older, am I still cool? Can I still be hip? Can I still have all these interests? Do you guys feel like there's something you're not as in-the-know about these days as you were when you were younger, maybe because of your life and work responsibilities?

AS: Music. I used to know everything about music, but I'm also not as interested, so that's probably why.

JS: For me, it's mostly technology. I can work the computer pretty well, but a lot of the social media stuff? I don't know how to do all that. I felt, like, older for the first time when I was working my computer in front of my niece and I was opening websites. And she said, "Look, Mommy! He uses his hands." And I was like, "What?" and she's like, "It's so funny how you drag the mouse up and click on stuff and drag it down." Because she just knows tablets, and it was like, hysterical to her. That was a real slap in the face. It was kinda like a scene in Back to the Future Part II when he goes to the future and the kids are hitting the gun-shooting game and he shoots all these things and the kids are like "What? You gotta use your hands?"