Multiple miniseries and movies have taken on Charlotte Bronte's Jane Eyre, so is another adaptation of the classic novel really necessary? Perhaps not, but director Cary Fukunaga's beautifully shot retelling is still a worthy addition to the previous versions of the tale. It stays loyal to Bronte's material while retaining the book's gothic soul. 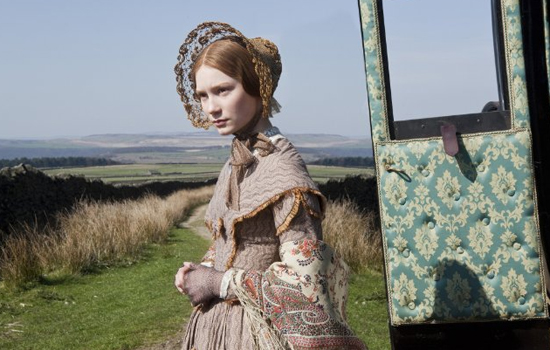 Mia Wasikowska stars as the literary heroine, a governess at a sprawling but dreary estate called Thornfield Hall. The film begins when a distraught Jane flees Thornfield and is taken in by clergyman St. John Rivers (Jaime Bell). Though Jane won't tell John about her past or where she comes from, the audience sees all of it via flashbacks, beginning with Jane's difficult childhood under the watch of her cold-hearted aunt (Sally Hawkins). Fed up with Jane, the aunt sends her away to the strict Lowood charity school, where Jane grows up with little human connection. Once she's old enough, she lands the job at Thornfield under the aloof Edward Rochester (Michael Fassbender) and mysterious events begin to occur in the house. It's a lot of ground for the film to cover, but by encapsulating Bronte's story, we get more insight into Jane, instead of focusing on her relationship with Mr. Rochester. The downside is that their romance could have benefited from the extra attention and development.

Find out why it's worth seeing after the jump. 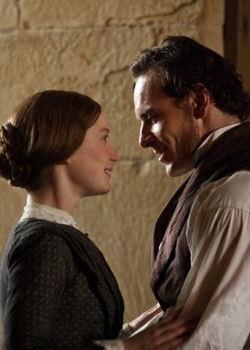 Jane and Mr. Rochester's relationship gets off to a rocky start. Jane first meets him while walking through the Thornfield property; she spooks his horse, he falls, and the two have a brief interaction that's more abrupt than flirtatious. But Wasikowska and Fassbender's chemistry continues to have a difficult time getting off the ground as the film progresses. While they're excellent when verbally sparring — Jane's quick wit versus Rochester's harshness — the movie struggles to build the longing between them needed to get fully swept up in their melancholy love story.

Wasikowska embodies Jane with a mousy wig and bare face. As Jane, she's often quiet and pensive, but you can see the gears turning in her head as her feelings bubble beneath the surface. Fassbender on the other hand, isn't what you might expect from the Byronic Rochester; for one, he's much more handsome. Even so, Fassbender makes Rochester perfectly repellent and attractive at the same time. He's brash one minute, sympathetic the next, and dare I say, I found him more interesting than Jane. While the two actors together struggle to generate heat, Fassbender is often smoldering on his own.

Though Fukunaga could've played up the mystery of Thornfield more (Rochester's secret in the attic isn't nearly as intriguing as it should be), Bronte's gothic vibe is alive and well in the director's hands, and the scenery is gorgeously gloomy. As Jane plods through the sodden moors or stares out the window of Thornfield, you can feel her isolation and anguish. But I was left wishing that her romantic feelings and her happier moments were equally stirring.

Netflix
Micheal Ward Is Back on Our Screens in Netflix's New Film, The Beautiful Game
by Navi Ahluwalia 1 day ago

Movies
Travis Scott Has a New Album and Movie on the Way, and We Are So Ready
by Kelsie Gibson 2 days ago