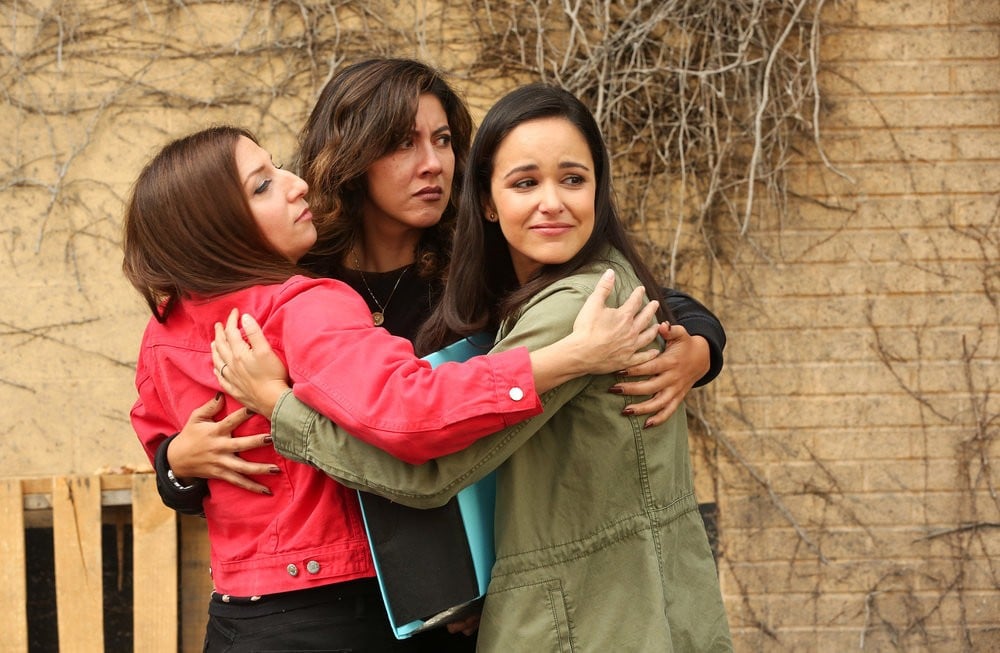 Fans of Brooklyn Nine-Nine Say Goodbye to the Queen of Emojis, Gina Linetti

Thursday night's Brooklyn Nine-Nine episode said farewell to an iconic character in the most fitting of ways: Gina Lintetti bids everyone adieu with an interpretive dance to embody four aspects of her personality. Just kidding — though she does try to. The episode is actually divided into four movements (which also serves as the episode title), in which Gina's relationship with members of the Nine-Nine are highlighted and she bestows them with a special "Gina Moment."

The first movement is between Captain Holt and Gina, playing what the episode describes as a "high-stakes game of chess." In reality, it's a glimpse into the sweet relationship between them as the two turn their chess match into a life lesson. Holt's understated, yet clearly emotional, concern for Gina is plain to see, and it's a perfect way to drive home how close the two have gotten over the years. Though the movement ends with Holt coming to accept Gina's plans to quit the Nine-Nine, he finds it much harder to accept when she "wins" by way of having "done reinvented the game."

The second movement is between Gina, Rosa, and Amy. After Amy gifts Gina with a book comprised of all her tweets (callback to season three!), her Gina Moment is about Amy learning how to just be herself instead of trying to be "cool" like Rosa. It's a special scene between the three women, as their dynamic has always been fun to watch. Who doesn't love seeing three very different women who are all badass in their own right be best friends?

Movement three brings us back to Jake and Gina's friendship, which is basically two close friends who enable one another to be utterly ridiculous. Their Gina Moment comes after Gina rejects guest star Mario Lopez in the name of proving to Jake that the Nine-Nine are "all the splash" she needs.

The final movement is perhaps the most Gina Linetti of all. Gina orders a gold statue in her likeness to be delivered to the Nine-Nine and leaves a video to make sure everyone knows that she's always going to be there for them. She even pauses to give them time to applaud her, which prompts Jake to say, "This feels right." And it totally does! The entire episode is a seamless story that gets us from point A to point B — which is to be emotionally devastated by Chelsea Peretti's departure but satisfied that Gina goes out in the best way possible.

Fans of the iconic character said goodbye the best way they know how — by getting a customized hashtag trending during the night of broadcast. The #ThankYouChelsea tag on Twitter is full of heartfelt notes from fans letting the actress know that "the human form of the 100 emoji" will never be forgotten. Check out some of the sweetest tweets we've rounded up below!

Dancing with the Stars
Derek Hough and Hayley Erbert's Paso Doble Is One of the Best DWTS Performances . . . Ever
by Kelsie Gibson 2 hours ago