Director Peter Jackson brings us back to Middle-earth in the first part of his trilogy, The Hobbit: An Unexpected Journey, which is a prequel to his Lord of the Rings movies. Though Jackson is meticulous in adapting J.R.R. Tolkien's classic novel, the movie feels overlong and overstuffed. Still, The Hobbit has new things to show us from Tolkien's world, and this time we go along on an adventure with a young Bilbo Baggins (Martin Freeman), the titular hobbit who has been recruited by the wizard Gandalf (Ian McKellen) to join a team of dwarves in their quest to take back their home from the dragon Smaug. Bilbo is hesitant to leave the comfort of his beloved Shire, but once he gets the adventure bug, he's off — as are we, on a journey that's unfortunately slow, but not without its highlights. 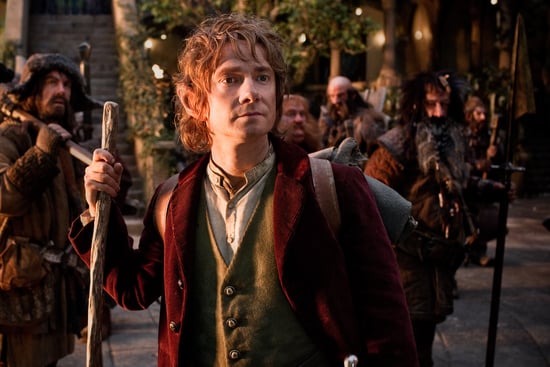 Lord of the Rings fans will no doubt come to see The Hobbit for more of Peter Jackson's able handling of Tolkien's world. However, that comparison ultimately hurts An Unexpected Journey, because it's simply not as captivating as the installments in the original trilogy. There are unnecessary subplots, expository conversations drag on, and few of the action scenes achieve nail-biter status. To find out what else I thought, just keep reading.

Freeman is perfectly cast as Bilbo, the central character and surprisingly integral member of Team Dwarf. Freeman brings a freshness to the film, and even though he can be selfish and tricky, Bilbo never comes across as anything but charming. He's an easy character to get attached to, but he's the only one who inspires any investment. No other new character really stands out; we're with the 13 dwarves throughout the film, but none of them are particularly compelling. They're simply a homogenous mash of dwarf characteristics: loud, messy, hungry, and brave.

Familiarity is perhaps The Hobbit's best asset. Any fan of Lord of the Rings will be delighted to revisit Middle-earth, with its pleasures and perils, and most of all, the characters who made an indelible impression when they first hit the screen, like Gandalf (Ian McKellen), Galadriel (Cate Blanchett), and Frodo (Elijah Wood). On that note, Gollum is the highlight of the film. His made-up diction is at once terrifying and hilarious, and Andy Serkis's performance as the CGI Gollum renders him scary yet endearing. The interaction between Bilbo and Gollum is the most satisfying part of The Hobbit, which feels like a reward after sitting through so many tedious scenes.

If familiarity is The Hobbit's greatest strength, then its length is its worst. In nearly three hours, the action sequences start to blend together, and with no emotional arcs to speak of, the movie loses your attention. It's not the best testament for the next two films. If they're as sluggish as An Unexpected Journey, then this journey is going to be long indeed.