Bruce Willis returns as tough-as-nails New York City detective John McClane in the unnecessary new chapter of the Die Hard franchise, A Good Day to Die Hard. When John finds out his estranged son Jack (Jai Courtney) is being held prisoner in Moscow, he packs his bags intending to rescue him. Little does he know that Jack is actually carrying out a mission for the CIA. Once John inadvertently foils the operation, Jack's task to rescue a political prisoner (Sebastian Koch) soon becomes their task. It's a basic plot that soon devolves into elongated, stunt-filled action scenes, blatantly manufactured emotional moments, and predictable plot twists. 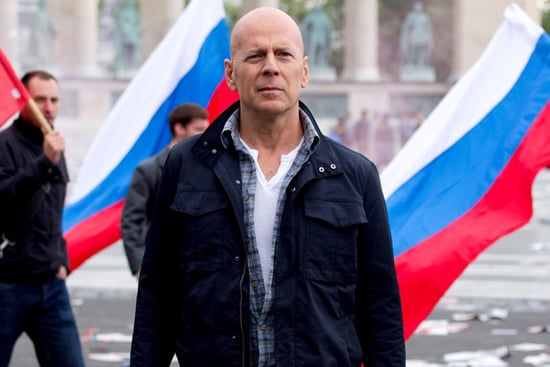 Even when forced to work with partners, John McClane has always been a lone wolf. This time, rather than running from someone, he's running toward his son, who, after a rocky childhood, happens to want nothing to do with him. Their troubled relationship takes a backseat to the action sequences, but when emotional moments do show up, they're schlocky and generic. At first, the headstrong Jack is furious to see his father, but wouldn't you know it, he slowly warms up to the old man. Jack's got the smarts, and John has the ability to fearlessly stand amid gunfire and wield a machine gun. They make a great team — if only they had better material to work with. Find out what else I thought of A Good Die to Die Hard when you read more.