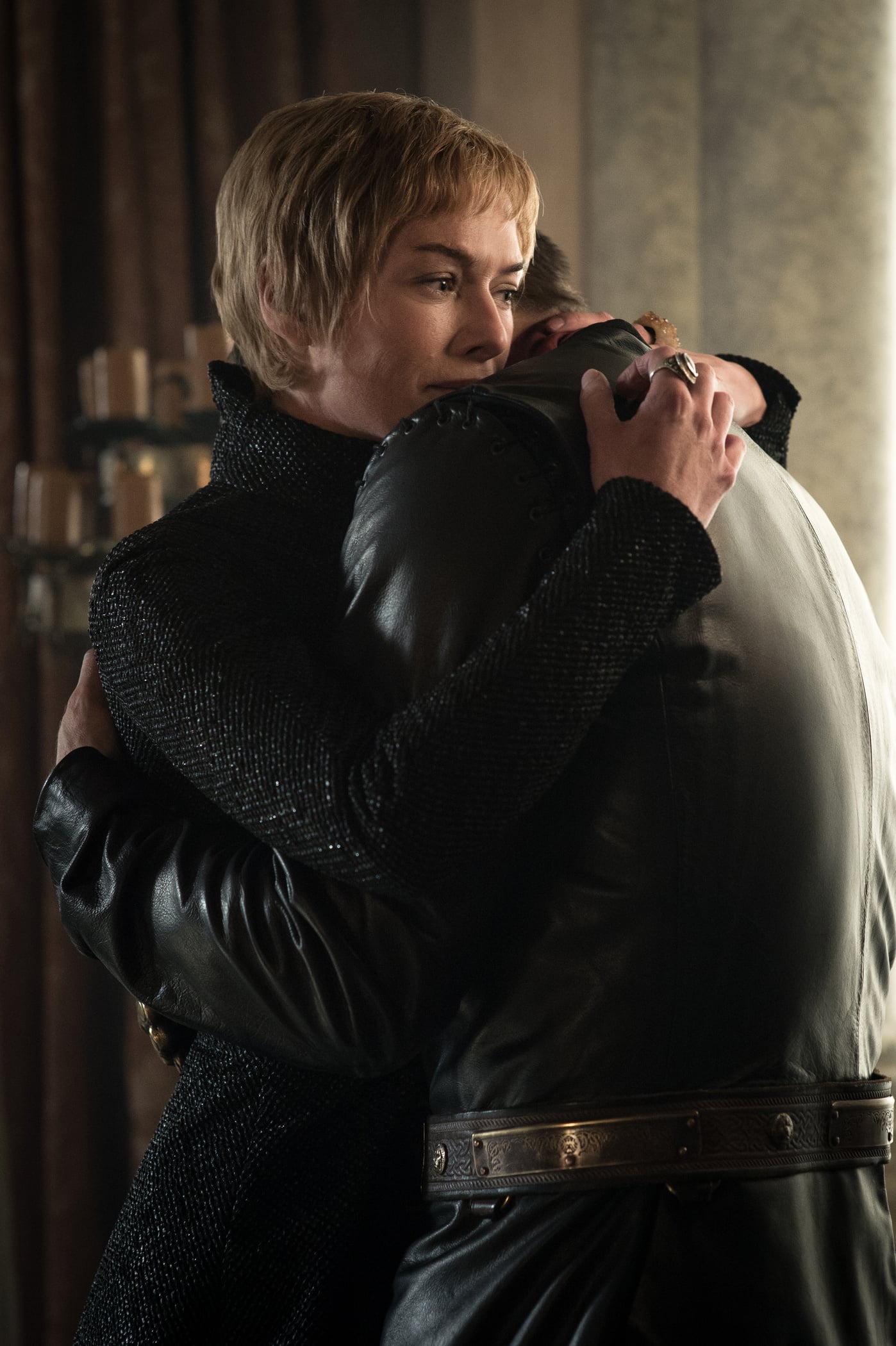 Spoilers for Game of Thrones below!

When Cersei Lannister shares her "good" news with Jaime that she's pregnant again during the tense fifth episode of Game of Thrones' seventh season, it's safe to say that plenty of jaws dropped (including Jaime's). While some fans are grossed out by the idea of another potential baby Joffrey (and the incest involved to create him or her), others doubt there's a pregnancy at all — it would be so like Cersei to play Jaime like that. While both of those points of view are valid in their own way, there's a third option to consider: Cersei is indeed pregnant, but the baby will be what finally kills her.

When Cersei's prophecy is first revealed in season five, a young Cersei is warned about the misery that awaits her by a witch named Maggy the Frog. "Everyone wants to know their future, until they know their future," she says. "You will never wed the Prince, you will wed the King . . . You'll be Queen, for a time. Then comes another — younger, more beautiful — to cast you down and take all you hold dear . . . The King will have 20 children, and you will have three . . . Gold will be their crowns, gold their shrouds."

Almost all of the prophecy proves true: Cersei goes on to marry a king, Robert Baratheon (who fathers many bastards, including the recently returned Gendry), and have three children — Joffrey, Myrcella, and Tommen — all of whom die in various ways. Two younger, more beautiful queens also threaten her place of power: Margaery Tyrell (whom Cersei kills in season six) and Daenerys Targaryen (who is in the midst of a vicious campaign to oust Cersei from the Iron Throne). Although that's all Maggy tells Cersei about her future in the show, there's an important aspect of the prophecy from the books that could mean her newly discovered pregnancy ends with her death.

See, in George R.R. Martin's fourth novel, A Feast For Crows, Maggy's prophecy also includes the line, "And when your tears have drowned you, the valonqar [High Valyrian for 'little brother'] shall wrap his hands about your pale white throat and choke the life from you." While it's widely thought to be a reference to Jaime eventually strangling Cersei (they're twins, but he was born a few seconds after her, making him her little brother), maybe Maggy's prophecy isn't as cut-and-dry as it first appears. What if, instead of literally being choked by Jaime, Cersei miscarries her fourth child and dies from the complications? That would mean her younger brother is still responsible for her death because he impregnated her. As Twitter user Emily Howard notes, it would be "his blood and potentially fulfill multiple prophecies as well as be some killer poetic justice."

The other side of this theory to consider is if the baby she's pregnant with is a boy. The "valonqar" in question could technically be the late Tommen's little brother, and Cersei could die during childbirth. If that happens, it would be a strong tie to the way her own mother died while giving birth to Tyrion. Cersei has always blamed Tyrion for "killing" their mother, so it would be some sweet, sweet justice for him after all these years.

Whether or not you believe that Cersei's pregnancy announcement confirms Maggy's prophecy from the book, Twitter couldn't help but latch on to the idea that her unborn baby could be her downfall.

Jaime will kill her performing Westeros' first ever c-section, which will be henceforth known as a Cerseirian

Cersei will miscarry or die before she's able to have the baby and that's just facts on facts #gameofthrones #thronesyall #demthrones pic.twitter.com/LwjWCXnwPz

What if the baby Cersei is carrying will kill her at birth, like Tyrion did w/ their mother? That would be a Valonqar twist! #GameOfThrones

Cersei lied to Jamie about being pregnant. (The witch foretold 3 children.) OR she will miscarry when she learns of Robert Barratheon's son

what if the new baby comes out a dwarf due to the inbreeding? pic.twitter.com/hrvy8m7UIo

Netflix
Can't Wait For Cobra Kai to Return? Here's Everything We Know About Season 4
by Monica Sisavat 2 days ago

Netflix
Blood & Water: The Actor Who Plays Sam Is New to the Show and the Industry
by Simrin Purhar 3 days ago