We may still be a few weeks off from Halloween, but Sony is already getting us in the Christmas spirit with the trailer for the CGI animated film Arthur Christmas. The kid-friendly movie takes a look at the complicated, family-run operation in Santa's workshop, which exists with the help of his super-organized eldest son Steve (Hugh Laurie), and his bumbling youngest son Arthur (James McAvoy). Jim Broadbent, who voices the role of Santa, and Bill Nighy, who voices the grandfather, round out a cast of big-name British talent, which means the film offers one endearing English accent after another and Britishisms that include Granddaddy Claus cutely complaining about never being able to remember the "ruddy" names of the reindeer. 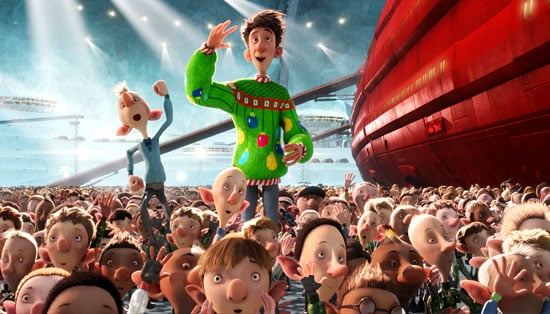 With his blind faith in the Christmas spirit and Santa, Arthur reminds me of an animated version of Buddy the Elf, which comes as a welcome contrast to some of the other films hitting theaters during the holidays. With movies like The Girl With the Dragon Tattoo billing itself as the "feel bad movie" of the holiday, my inner cheeseball is happy there's still a cutesy Christmas movie hitting the theater. Watch the trailer for Arthur Christmas after the jump.

Movies
Everything We Know So Far About Black Panther: Wakanda Forever's Cast
by Amanda Prahl 2 days ago

Michael B. Jordan
We Still Aren't Sure If Michael B. Jordan Will Appear at All in Black Panther: Wakanda Forever
by Amanda Prahl 2 days ago
Netflix
Greetings, Kate! Bridgerton's New Leading Lady Makes Her Debut in First Season 2 Set Photos
by Karenna Meredith 4 days ago