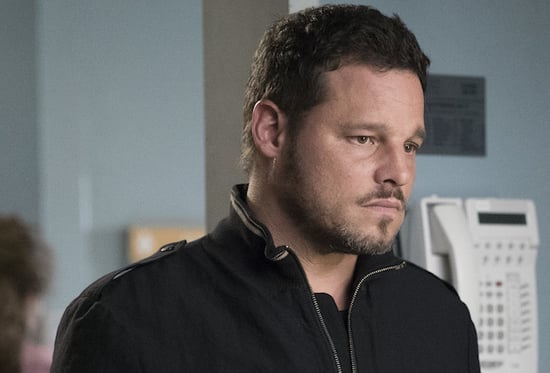 In the latest episode of Grey's Anatomy, Alex instigates a scary fight with Amelia's colleague, Dr. Koracick, after the neurosurgeon tells him there's no way that they can safely help Alex's young cancer patient. The peds surgeon violently corners Dr. Korackick, grabbing him by the collar to threaten him. This isn't the first time we see Alex's rage get the best of him, and I'm legitimately worried about what the future holds for Alex.

Like Meredith, he's grown so much over the last fourteen seasons, transforming from a reckless frat boy to a respectable adult. He helps Izzie in her most vulnerable moments (particularly regarding the Denny Duquette incident and her cancer diagnosis) and has worked hard to become a caring pediatrics surgeon. We later learn that he has been protecting his schizophrenic mother from his father, an abusive drug addict.

Related:
Wait a Second: Maybe the Grey's Anatomy Finale Won't Be as Devastating as We Think

Alex's Achilles' heel is his temper. Alex has always been a little hot-headed. We can't forget how he brutally hits DeLuca in the season 12 finale after the doctor helps a drunken Jo. After that incident, Alex ends up with a stint in prison and faces a suspension from his surgical post for the majority of season 13. He later keeps tabs on Jo's abusive estranged husband Paul, with less than good intentions in mind.

Things finally look up for Alex this season. He reconciles with Jo and they're now officially engaged. Plus, he no longer has to worry about Jo getting hurt by her ex-husband. But things have also been rough for Alex career-wise, especially when it comes to helping his young cancer patient Kimmie. First, Alex and Amelia get rejected for funding for their wave frequency idea to help her. When the surgeons do discover a way to use lasers to blast tumors, Amelia and Dr. Koracick deem the procedure too dangerous for Kimmie. Alex's reaction to Koracick makes me feel nervous given that his recent violent behavior had landed him in jail. It feels like the beginning of a dangerous path for Alex.

I'm even more concerned about Alex now that we know that his old fling, Olivia Harper, will be stopping by Grey Sloan with her son later this season. Is her kid Alex's secret son? Probably not, but there would be a lot of drama if he was. I'm mainly anxious about how Olivia's return will inevitably create a rift between him and Jo, possibly through jealousy, an affair, or another heartbreaking kid case. Whatever comes of her return might be the last straw for Alex.

Alex will probably not die or permanently move away. That would leave Meredith, Miranda, and Richard as the only original characters remaining. And he's Meredith's person, after all. I do think that trouble lies ahead for Alex, and by that, I mean that his rash behavior will likely get the best of him. Which means that he will likely end up in prison or lose his job (again). He might act out around another doctor (possibly Jo) or even resort to unethical measures to help Kimmie. The latter theory isn't something foreign to the Grey's universe. Meredith herself did do some ethically sketchy things with an Alzheimer's drug trial to help Adele, but still managed to win a Harper Avery. Given how things usually work out on Grey's, Alex might be able to go to anger management rehab for a while or prove himself capable of getting his job back.

Ellen Pompeo recently hinted that the season 14 finale will be "devastating." The finale looks a little grim for Alex at this point. Since Jessica Capshaw and Sarah Drew are exiting the show this season, it's more likely for Arizona or April to meet a tragic fate. Still, I'll be keeping an eye out for Alex.