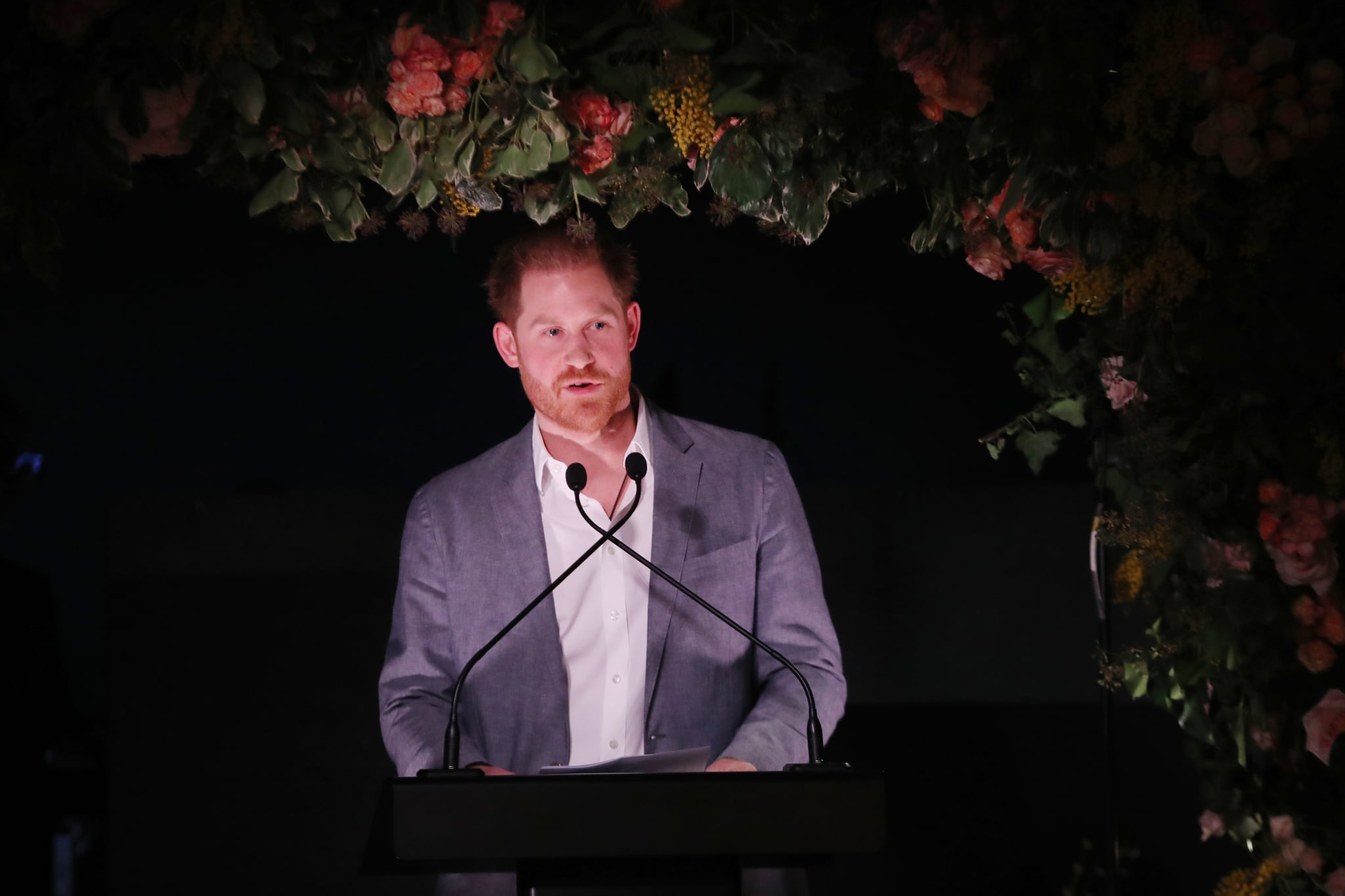 Prince Harry spoke publicly about his and Meghan Markle's split from the royal family for the first time on Sunday. While attending an event for supporters of his Sentebale charity in London, the 35-year-old addressed the recent discussions between himself and the queen and thanked the crowd for their well-wishes. "Before I begin, I must say that I can only imagine what you may have heard or perhaps read over the last few weeks," Harry said. "So, I want you to hear the truth from me, as much as I can share — not as a prince, or a duke, but as Harry, the same person that many of you have watched grow up over the last 35 years — but with a clearer perspective."

Harry went on to praise fans' support of Meghan, who met quietly with a women's charity in Canada last week. "The UK is my home and a place that I love. That will never change. I have grown up feeling support from so many of you, and I watched as you welcomed Meghan with open arms as you saw me find the love and happiness that I had hoped for all my life. Finally, the second son of Diana got hitched, hurray!" Harry quipped, before gushing about his wife of nearly two years. "I also know you've come to know me well enough over all these years to trust that the woman I chose as my wife upholds the same values as I do. And she does, and she's the same woman I fell in love with. We both do everything we can to fly the flag and carry out our roles for this country with pride. Once Meghan and I were married, we were excited, we were hopeful, and we were here to serve."

Just a day before Harry's speech, his grandmother, Queen Elizabeth II, released a statement confirming that internal discussions around Harry and Meghan's royal exit had concluded and that the couple — along with baby Archie — will "always be much loved members" of the British royal family. "I recognise the challenges they have experienced as a result of intense scrutiny over the last two years and support their wish for a more independent life," the queen added.

Harry touched on those challenges in his public statement on Sunday, insisting that his stepping back was a necessary act. "The decision that I have made for my wife and I to step back is not one I made lightly. It was so many months of talks after so many years of challenges," Harry said. "And I know I haven't always gotten it right, but as far as this goes, there really was no other option. What I want to make clear is we're not walking away, and we certainly aren't walking away from you."

"It has been our privilege to serve you, and we will continue to lead a life of service."

Along with the queen's statement, Buckingham Palace shared more details on what Meghan and Harry's new life will look like. It was confirmed that they would no longer be using their HRH titles, and that they intend to reimburse UK taxpayers for renovations made to Frogmore Cottage last year. At the Sentebale event, Harry explained that the end result wasn't exactly as he and Meghan hoped. "Our hope was to continue serving the queen, the commonwealth, and my military associations, but without public funding," he said. "Unfortunately, that wasn't possible. I've accepted this, knowing that it doesn't change who I am or how committed I am. But I hope that helps you understand what it had to come to, that I would step my family back from all I have ever known, to take a step forward into what I hope can be a more peaceful life."

A post shared by The Duke and Duchess of Sussex (@sussexroyal)

Harry also took a moment to reference his late mother, Princess Diana. "I was born into this life, and it is a great honor to serve my country and the queen. When I lost my mum 23 years ago, you took me under your wing," he said. "You've looked out for me for so long, but the media is a powerful force, and my hope is one day our collective support for each other can be more powerful, because this is so much bigger than just us. It has been our privilege to serve you, and we will continue to lead a life of service."

Harry ended his speech by praising his family members, despite recent rumors of royal infighting. "I will always have the utmost respect for my grandmother, my commander in chief, and I am incredibly grateful to her and the rest of my family for the support they have shown Meghan and I over the last few months. I will continue to be the same man who holds his country dear and dedicates his life to supporting the causes, charities, and military communities that are so important to me. Together, you have given me an education about living. And this role has taught me more about what is right and just than I could have ever imagined. We are taking a leap of faith — thank you for giving me the courage to take this next step."

Freeform
Get to Know More About Sofia Black-D'Elia, the Star of Single Drunk Female
by Princess Gabbara 22 hours ago