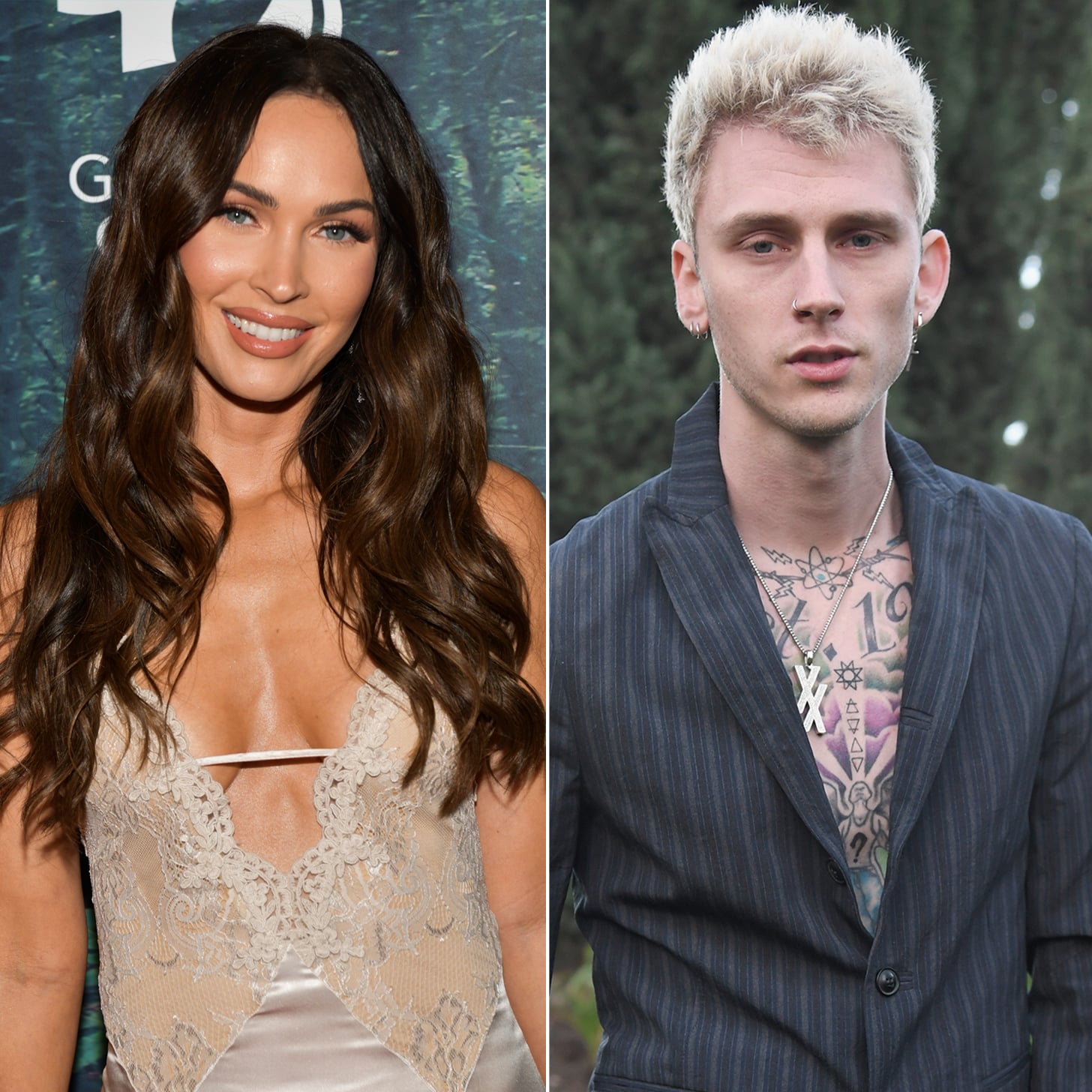 If you happen to be curious about the status of Megan Fox and Machine Gun Kelly's (née Richard Colson Baker) relationship, apparently things are pretty serious. Rumors of their romance began swirling back in May, five months after Megan separated from husband Brian Austin Green. Megan and MGK first met on the set of their upcoming movie, Midnight in the Switchgrass, and in a recent podcast interview with Lala Kent and Randall Emmett on Give Them Lala . . . With Randall, the couple opened up about how their relationship came to be.

According to Megan, she had a feeling that something would eventually happen between them from the moment she found out he had signed up for the film. "I was like, 'Who is going to play this role?' And he was like, 'Oh, we just got Machine Gun Kelly,' and immediately, I was like, 'Uh oh' because I knew — I could feel that some wild sh*t was gonna happen to me from that meeting, but I wasn't yet sure what," she explained. "I just felt it like, deep in my soul that something was going to come from that. So then, we met on set."

MGK, on the other hand, remembered waiting outside of his trailer every day just so he could catch a glimpse of Megan. "She would have to get out of her car. There were like, five steps between the car and the trailer, and I would just sit there and hope," he said.

"I knew right away that he was what I call a twin flame."

Eventually, Megan and MGK met and she knew immediately that MGK was her "twin flame." "I was in a room with him and said hello to him and looked into his eyes . . . I knew right away that he was what I call a twin flame," Megan explained. "Instead of a soulmate, a twin flame is actually where a soul has ascended into a high enough level that it can be split into two different bodies at the same time. So we're actually two halves of the same soul, I think. And I said that to him almost immediately, because I felt it right away, so I think it was the second day, I asked him to come into my trailer for lunch, and I put him through all of this astrology stuff . . . I went deep right away. I knew before I even did his chart, I said to him, he has a Pisces moon. I could tell by his energy." When you know, you know, right?

Megan and Brian called it quits after 10 years of marriage this past December. They have three sons together, 7-year-old Noah, 6-year-old Bodhi, and 3-year-old Journey. Meanwhile, MGK has previously dated Halsey, Kate Beckinsale, and Noah Cyrus.

Midnight in the Switchgrass is a crime thriller that follows an FBI agent and Florida state officer as they team up to investigate unsolved murder cases. A release date still has yet to be announced, but filming recently resumed after it took a months-long break due to the coronavirus pandemic.

Music
H.E.R. Feels Like She's Finally Earned Her Stripes as an Artist
by Njera Perkins 15 hours ago

Nina Dobrev
Nina Dobrev, Abigail Cowen, and Eric Dane on Why It's So Fun to Be Bad
by Leo Margul 18 hours ago