Tom and Katie's big day came and went. We are still learning more about the event but it sounds pretty traditional to me. Katie had her Daddy walk her down the aisle and a bunch of bridesmaids by her side. As reported earlier, the bride and groom said I do in Armani. They had 150 guests at the Odescalchi Castle in Lake Bracciano, Italy where the rain stopped just in time for their affair. Yes, there is that whole Scientology thing but as most of you all know we are a sucker for weddings and babies and we'd much rather write about happy times like this then pending divorces (with the exception of Britney of course). People reports: 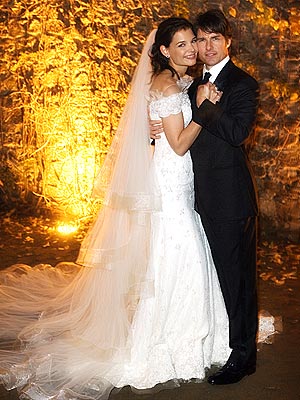 With thousands of fans, photographers and TV cameras watching from afar, Cruise and Holmes were joined by family – Katie's dad Martin walked her down the aisle – and a slew of celeb pals, including Will and Jada Pinkett Smith, Brooke Shields and Chris Henchy, Victoria Beckham, Jennifer Lopez and Marc Anthony, and Jim Carrey and Jenny McCarthy, among others.

The sunset ceremony was performed by a Scientology minister, according to a statement from their reps. The wedding party included Cruise's children, Isabella and Connor, the best man was Cruise's best friend, David Miscavige – the head of the Church of Scientology – and Katie's sister Nancy Blaylock served as the matron of honor.

Though initially there were questions about whether Cruise and Holmes's marriage on Saturday was official – the Mayor of Bracciano, Italy, said the couple needed to have a civil ceremony in town in order to make it legal – Cruise's reps say Tom and Katie took care of everything beforehand.

"As is customary for couples marrying outside of the United States, Cruise and Holmes officialized their marriage in Los Angeles prior to their departure for Italy," according to the statement.

Congrats to the happy couple. Hopefully we'll get more pictures from this extravagant affair so stay tuned. Check out even more details at People's website.

Katie Holmes
Outfit Obsession: Katie Holmes in a Denim Skirt and Birkenstocks — Could She Be Any More '90s?
by Sarah Wasilak 8/04/20