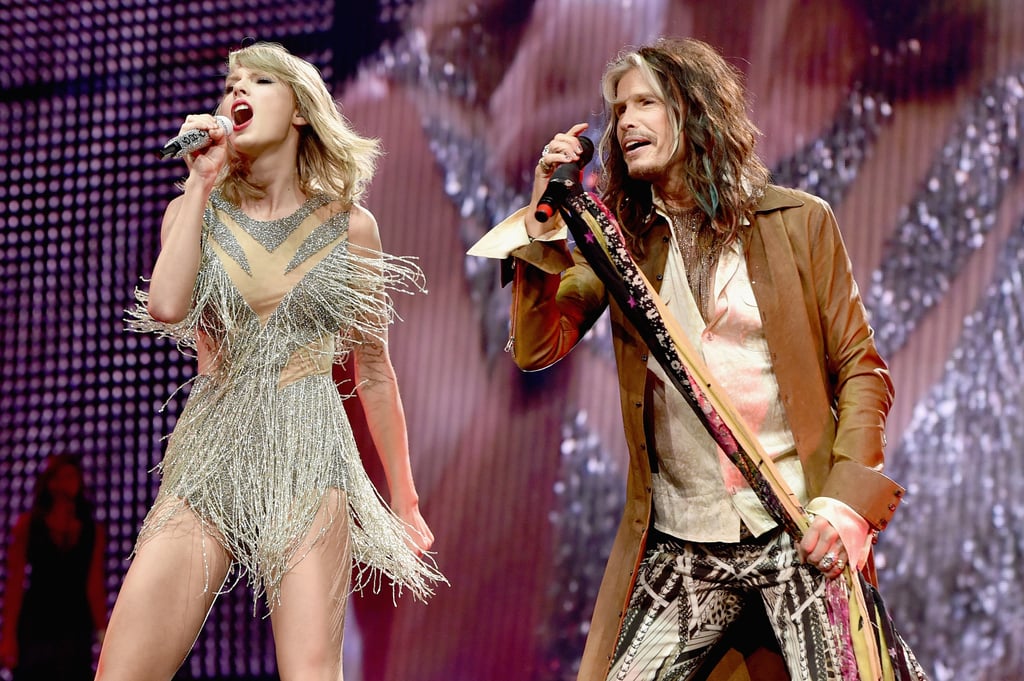 Fans were in for quite the surprise during Taylor Swift's 1989 world tour show in Nashville on Friday. For her latest round of surprise guests, Tay brought out Alison Krauss, rising country singer Kelsea Ballerini, and rock legend Steven Tyler! The duo stole the show with a performance of Aerosmith's "I Don't Want to Miss a Thing." But the fun didn't stop there. After the show, Taylor tweeted out how much of an honor it was to sing with Steven and shared a clip from the show.

Singing 'I Don't Want to Miss a Thing' with @IamStevenT was an honor. So inspired by how sweet he was to all of us. pic.twitter.com/D6YOv1yYXe

The funny thing is, Taylor had tweeted about the song back in October 2012. Steven actually retweeted it when he posted his own tweet about the show!

I feel like I'd be more understood if people knew 'I Don't Want to Miss a Thing' by Aerosmith is how most of my emotions sound in my head.

Keep reading for a look at Taylor and Avril Lavigne's surprising onstage moment, then watch Taylor and Avril put all those feud rumors to rest. Plus see what happened when Taylor met a 7-year-old dancing fan.

Previous Next Start Slideshow
Taylor SwiftSteven TylerMusic
Around The Web

Music
Here's BTS's Permission to Dance On Stage Concert Setlist, For Your Listening Pleasure
by Kelsie Gibson 1 day ago

Eve
Throw It Back With This Best Hits Playlist From Queens Stars Eve, Brandy, and Naturi Naughton
by Naledi Ushe 3 days ago

Celebrity Instagrams
Bahja Rodriguez May Be Young, but She's No Rookie When It Comes to the Music Game
by Njera Perkins 3 days ago

Music
Kacey Musgraves's "Gracias a la Vida" Poses the Question: Has She Earned the Right to Sing Classic Spanish Covers?
by Christina Berke 3 days ago

Khalid
Khalid's New Song "Present" Is For Everyone Who Is in Love — Like, Hopelessly in Love
by Naledi Ushe 3 days ago