Victoria Beckham was in a black version of the Giles Deacon dress she wore for Fashion's Night Out to celebrate the launch of Diane von Furstenberg's boutique at Claridge's in London last night. Madonna and Gwyneth Paltrow arrived fashionably late and were inseparable throughout the evening, which certainly combats rumors that the longtime friends are on the outs. Gwyneth was in high spirits, perhaps toasting to her new role opposite Bradley Cooper and Bruce Willis in an upcoming M. Night Shyamalan project. Posh arrived in England at the beginning of the month and has been hitting the town with her three sons while David's in South Africa for the World Cup. The Beckham clan is rumored to be planning a post-tournament reunion with a vacation in St. Tropez. 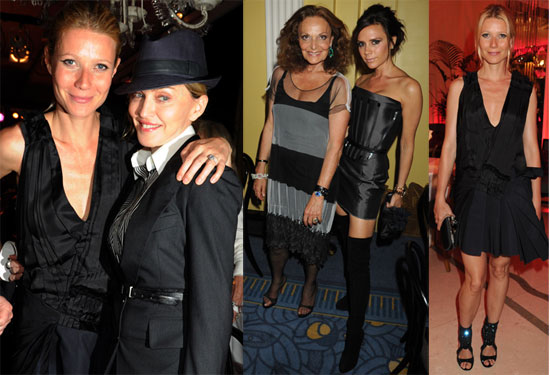 Madonna
I've Been Wearing Lourdes Leon's Material Girl Brand Since Middle School, and You Know What? It's Still Cool
by Samantha Bergeson 4/27