David Beckham was back on the field with the English soccer team this morning for a training session in Rustenburg, South Africa. He participated in some of their warmup runs, but David stuck to the sidelines during Saturday's game against the American team. England's next match will be against Algeria on Friday, and David's expected to stay with the squad throughout the tournament. His wife, Victoria, meanwhile, has been in London with their three sons looking stylish as usual. She brought Romeo, Cruz, and Brooklyn out for a fun afternoon of rock climbing today with longtime friend Tana Ramsey and a few of her children. There's more fun for the kids to come when Victoria's long-planned appearance on SpongeBob SquarePants airs on July 5. 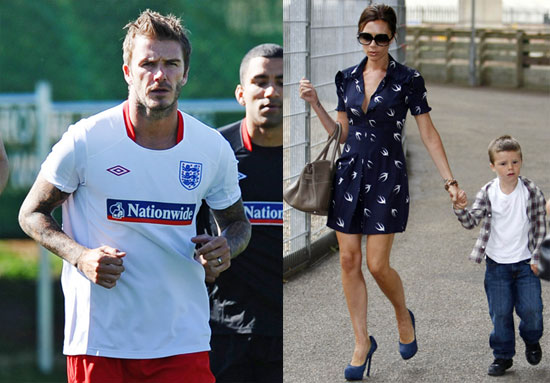 To see more of the Beckhams, just read more.

Baby Names
Shawn Johnson *Finally* Shared Her Baby Boy's Name, and It's a Trendy One!
by Alessia Santoro 2 days ago

Usher
Usher Is Going to Be a Dad of 4 Soon! Meet His 3 Kids, Who Are About to Get a Baby Sibling
by Alessia Santoro 1 week ago

Celebrity Families
M. Night Shyamalan's Daughters Stole the Spotlight at His Premiere of Old
by Kelsie Gibson 1 week ago