Many of the famous fans who headed out to see the seventh NBA playoff game in LA last night left happy after the Lakers beat the Celtics! The final score was 83-78, and that was enough to earn the Lakers their second consecutive championship. Jake Gyllenhaal was front and center with friends, while nearby Courteney Cox and David Arquette chilled with Laura Dern and Ben Harper. The Kardashian clan was there to cheer on Lamar Odom along with their close friend Ryan Seacrest, whose lady love Julianne Hough was away on business. Fergie took in the action with her husband, Josh Duhamel, while Usher was there solo. Christina Aguilera once again serenaded the stadium with the national anthem, then she took a seat beside her husband, Jordan Bratman, to root for the hometown team. 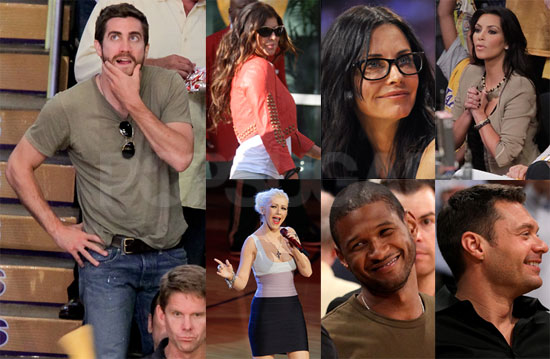 To see more from the game, just read more.

Animated Movies
Get a First Look at PAW Patrol: The Movie, Including the Pup Kim Kardashian Voices
by Alessia Santoro 1 week ago

Kim Kardashian
Kim Kardashian Bonded With Bridgerton's Nicola Coughlan Over — What Else? — Corsets
by Victoria Messina 3 weeks ago