Julia Roberts and Meryl Streep were among those who dressed up last night to honor the career of legendary director Mike Nichols. The women were joined by stars from many of Mike's famous films like Dustin Hoffman, who starred in The Graduate, Emma Thompson, Natalie Portman, and Tom Hanks. Julia took the stage to toast Mike, saying, "Mike is one of the few people in the world who's an 'EGOT' — it means he's won an Emmy, a Grammy, an Oscar and a Tony." She mingled with Oprah Winfrey afterward to catch up since their last chat about Eat, Pray, Love. Harrison Ford also shared kind words about Mike, but he spent most of the evening cuddling up to longtime love Calista Flockhart. The evening was notable for another reason — John Goodman finally showed off his dramatic weight loss, and he made the rounds chatting with Hollywood veterans like Jack Nicholson and Warren Beatty. 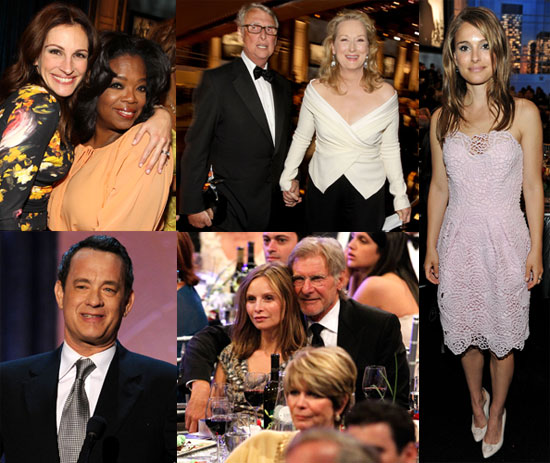 To see more from the big night, just read more.

Tom Hanks
Tom Hanks Played 7 People in The Polar Express, Including Santa — No Wonder It's So Magical!
by Chanel Vargas 12/16/20