Drama? We don't know her. After years of feuding and back-and-forth comments about each other, Lady Gaga and Madonna are ready to put the past behind them. On Sunday night, Gaga attended Guy Oseary and Madonna's Oscars afterparty, where Time partnered with the event and photographer JR to capture the iconic moments of the night, including the two songstresses embracing each other alongside Gaga's award. Gaga and Madonna's feud goes all the way back to 2009, when Gaga first burst onto the music scene and many people drew comparisons between their musical styles.

In 2012, Madonna spoke openly about how "Born This Way" reminded her of her 1989 hit "Express Yourself," and she even famously called Gaga "reductive." In 2016, during an interview with Zane Lowe, Gaga couldn't hold back when Madonna's name was brought up. "Madonna and I are very different . . . I don't mean to disrespect Madonna. She's a nice lady, and she's had a fantastic huge career. Biggest pop star of all time. But I play a lot of instruments. I write all my own music. I spend hours and hours a day in the studio," Gaga said. "I'm a producer. I'm a writer. What I do is different." Most recently, Madonna even accused Gaga of copying her "100 people in a room" quote.

But it's during these incredibly special nights that drama is forgotten and friendships are formed. Gaga had a huge night — she gave us the "Shallow" performance of a lifetime and won her first-ever Oscar for best original song — and it looks like Madonna couldn't help but be excited for the A Star Is Born actress. Ahead, see more footage from their sweet moment together.

Related:
Oh, What a Night: See Over 200 of the Best Photos From This Year's Oscars!
Previous Next Start Slideshow
Lady GagaMadonnaAward SeasonOscarsCelebrity FriendshipsCelebrity Feuds
Around The Web 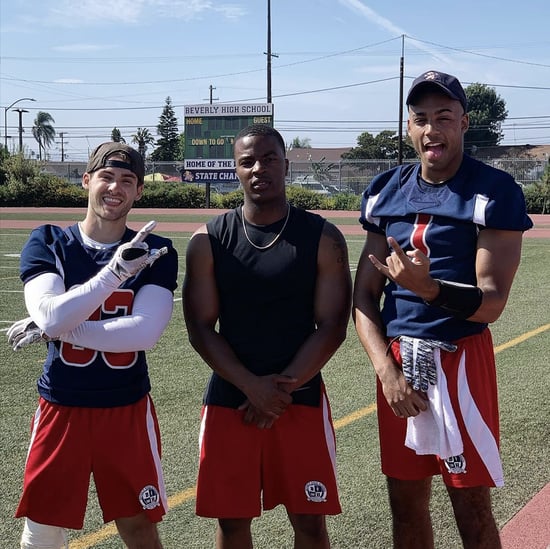 Lady Gaga
Lady Gaga's New Song Might Be a Little Cheesy, but It's Her Most Important One Yet
by Yerin Kim 3 days ago