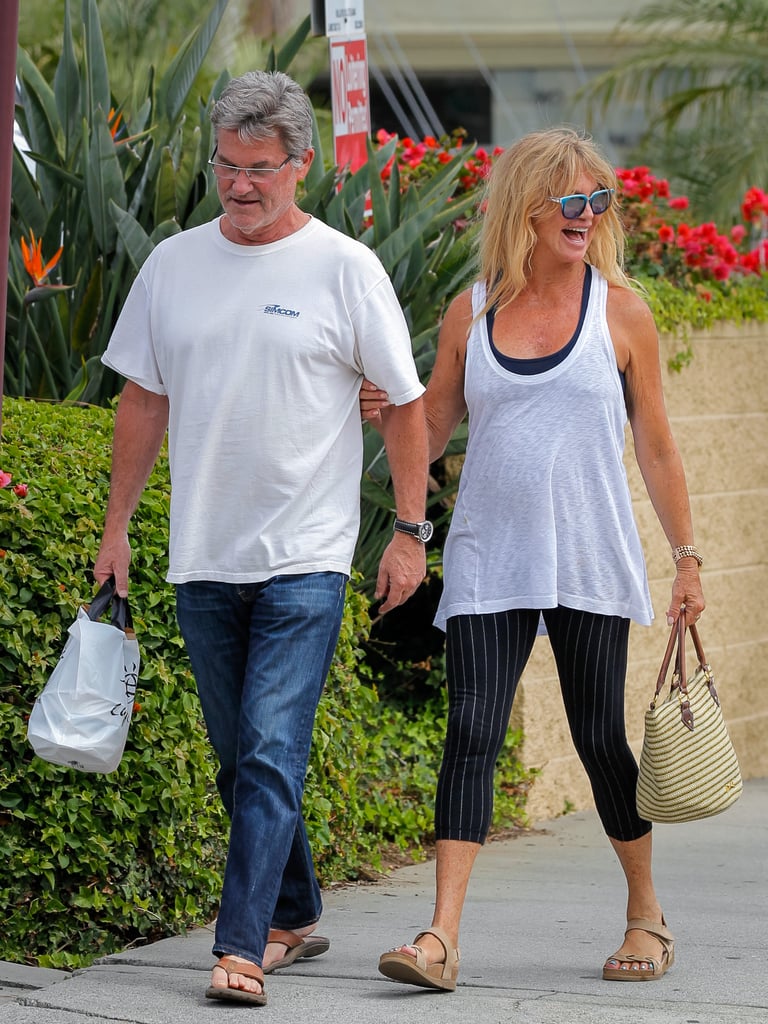 Kurt Russell and Goldie Hawn were spotted out and about on a smiley stroll in LA on Thursday. They linked arms and stayed close while walking side by side, and gave a wave to a passerby. It's been a while since we've seen the couple in public, though they have made separate outings over the Summer; Kurt popped up at Comic-Con to support the upcoming Quentin Tarantino film The Hateful Eight, and Goldie stepped out with her daughter, Kate Hudson, for the Glamour Women of the Year Awards. She also joined Kate on a fun girls' getaway to Greece in June and showed off her impressive beach body in a sleek one-piece swimsuit.

The couple, who have been dating since 1983 and have starred together in three films, proved that they were the definition of #RelationshipGoals recently when they cuddled for a movie night together. Goldie tweeted out about the date night, saying, "Kurt n I snuggled up and watched Overboard together. The first time we have seen it all the way thru since it came out. Now that's Romance." Keep reading to see their latest cute pictures, and check out more Hollywood pairs whose relationships have stood the test of time.

Celebrity Couples
No, Jodie Foster Did Not Set Up Shailene Woodley and Aaron Rodgers
by Grayson Gilcrease 2 days ago
Emma Stone
Emma Stone and Dave McCary Were Spotted in LA as They Gear Up For Parenthood
by Karenna Meredith 4 days ago

Keke Palmer
So, Does This Mean Keke Palmer and Styn Are Official Official Now?
by Monica Sisavat 1 week ago