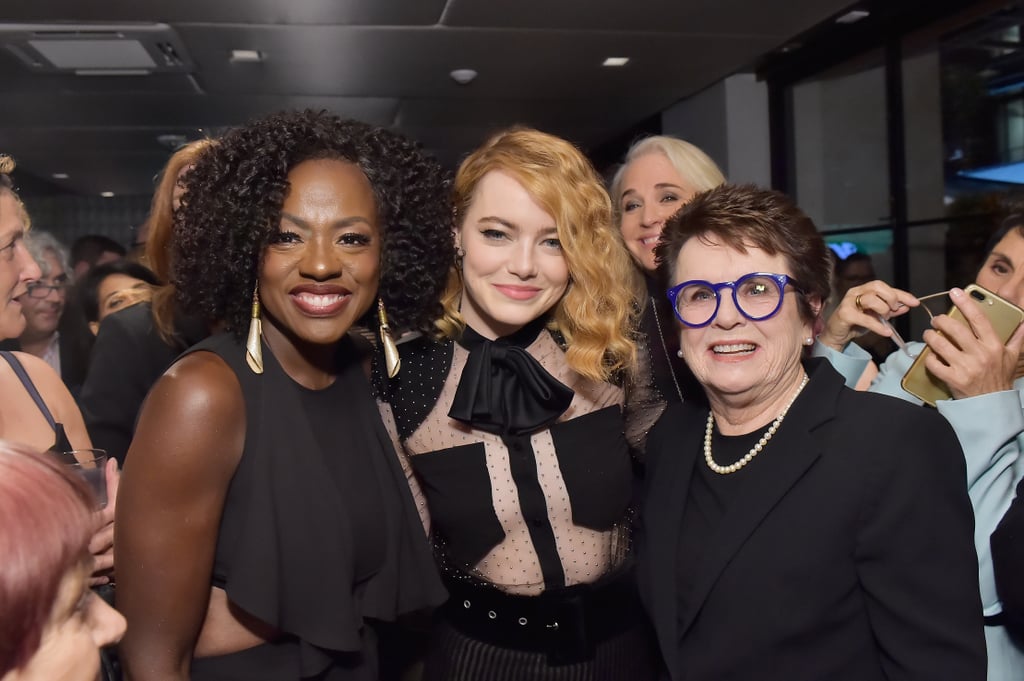 Emma Stone hosted Oscar-nominated women — including this year's hopefuls, like Ladybird's Greta Gerwig, I, Tonya's Margot Robbie, and Mudbound's Mary J. Blige — and celebrated the work of Time's Up and #MeToo in Beverly Hills Friday night. The event, sponsored by Stella Artois, raised a toast last night to the organization Women in Film. #MeToo founder Tarana Burke among the guests of honor, and the movement was top of mind for the evening's hosts and attendees.

Viola Davis was the first actor to address the packed room, giving a rousing speech on self-respect. She remembered telling her 5-year-old daughter, Genesis, she was "complicated," which didn't go over well with her little girl. "I said, 'Genesis, that's a compliment! That means you're multifaceted,'" she said.

Davis's remarks were aimed at women who might, like Genesis, feel like being complicated is a negative. She addressed those of us who are "feeling like maybe we have a little extra weight on us. Feeling like, especially in this past year, that we have testimonies of sexual assault, feeling less than, or, I don't know, feeling always at the caboose. We're still worth it. With all our imperfections. With all our complexities. We're worth it. And this is a year of owning who we are. You either own your story and you share it or you stand outside of it, always hustling for your worth."

Davis's speech drew a tsunami of applause. "No one should ever have to follow Viola Davis, ever. And that was off the cuff!" Emma joked as she took the stage just after her. After congratulating this year's nominees, she took a moment to spotlight the work of #MeToo and Time's Up — of which she's a member — though she didn't call them out by name. "This has been a historic year for so many reasons; many of you are a part of that. And as you said, it's a tipping point, and it's very exciting, and it can be very jarring. . . . I'm so inspired by the voices I've gotten to listen to and the things I've learned in the past couple of months. Keep at it, and congratulations."

Both efforts will likely continue to be a major topic of conversation at Sunday's Oscars, though one of Time's Up's leaders, Ava DuVernay, said the group plans to "stand down" on the red carpet — as they continue their efforts off the carpet, "working their butts off" to enact change.

Tyler the Creator
Tyler, the Creator's Stunning AMAs Performance Took Us to a Rap Winter Wonderland
by Njera Perkins 5 days ago

Jay Z
JAY-Z Continues to Win For Hip-Hop as the Most Grammy-Nominated Artist in History!
by Naledi Ushe 5 days ago