Forest Whitaker woke up early this morning to announce the Oscar nominations in LA. Benjamin Button won the most nominations with a total of 13, and Slumdog Millionaire also scored an impressive 10. Nominees for Best Picture are Slumdog Millionaire, Benjamin Button, Milk, The Reader, and Frost/Nixon. Kate and Leo were passed over for acting in Revolutionary Road as was The Dark Knight for best picture, which we're sure will cause some controversy. Contrary to the Golden Globes, Milk got a ton of recognition, scoring eight nominations including Best Actor for Sean Penn, who will be competing with Brad Pitt and Mickey Rourke. Angelina Jolie's performance in Changeling will be going up against Kate Winslet for Best Actress in The Reader. Heath Ledger got a Best Supporting actor nod posthumously for The Dark Knight, going up against Robert Downey Jr. and Josh Brolin. The Reader, Frost/Nixon and Doubt were also big winners with five nods each. Congratulations to all of the nominees — check out the full list here! 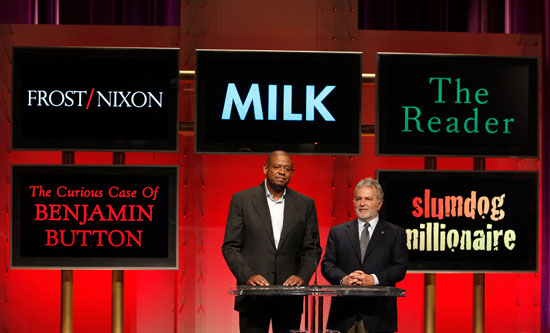